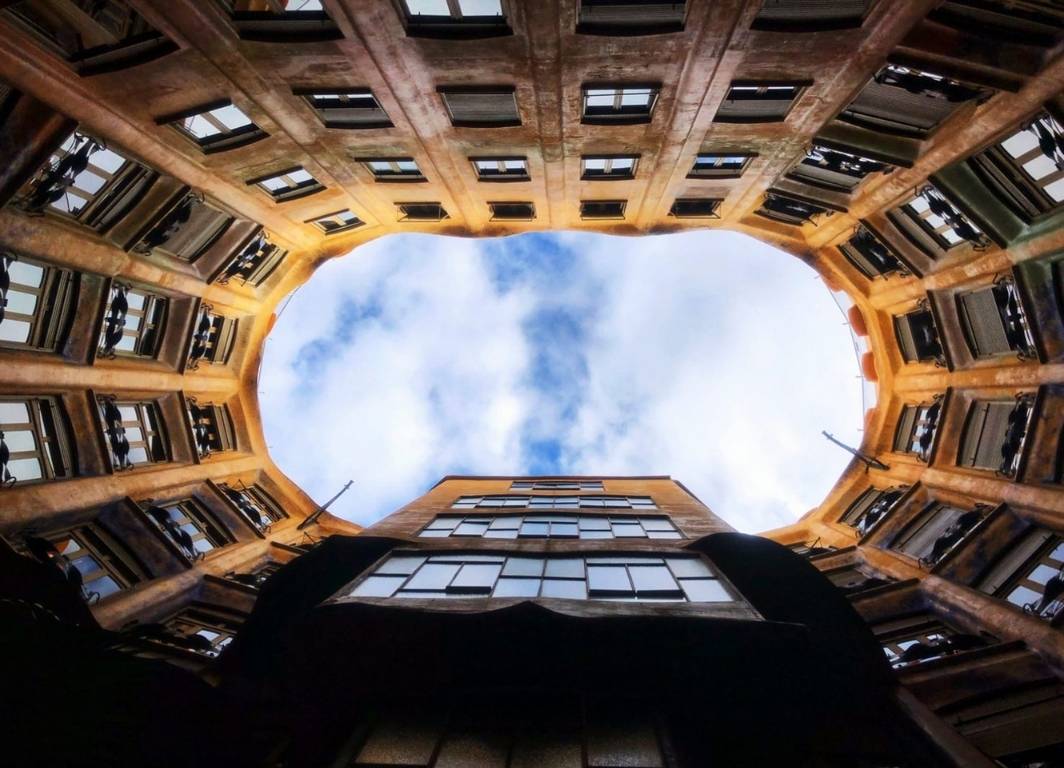 Casa Milà, also known as the La Pedrera, is a giant petrified wavy sculpture featuring the Catalan Art Nouveau architectural style. The construction began from 1905 to 1910 commissioned by Roser and Pere Milà; Antoni Gaudí, the most influential figure in Catalonia, designed Casa Milà as his last civil project before shifting focus to Sagrada Família. In other words, Casa Milà has all the elements the architect has learned over the years. A perfect representation of transforming nature into architecture.

Casa Milà is located in the heart of Passeig de Gràcia, one of the most high-end avenues in Barcelona, where all the prestigious shops, the finest entertainment stations, and upper-class residential apartments.

Casa Milà is also Antoni Gaudi’s most controversial masterpieces. It started with its unpopular name to architectural design. Many thought the irregular stone wavy shape was inappropriate for Passeig de Gràcia; The project was terminated by a turbulence relationship between Gaudi and Milà.

The wave fronted Casa Mila was once decried as “La Pedrera” or “The Stone Quarry,” which has been restored to glory by the Caixa de Catalunya saving bank after years of decline; UNESCO declared Casa Milà (La Pedrera) as a World Heritage Site in 1984. Currently has become one of Barcelona’s most famous attractions. Some of the building spaces are available for cultural exhibitions, workshops, and public events.

Antoni Gaudí i Cornet (1852-1926) was a Catalan architect. He is known as the most significant influencer of Catalan Modernism. Most of Gaudí’s works are in Barcelona, including Casa Vicens, La Sagrada Família, Parc Güell, and Casa Batlló. The architect has seven properties that are World Heritage Sites by UNESCO.

Gaudí was born in El Baix Camp Tarragona before moving to Barcelona to study architecture. The architect introduced some of the essential elements in his early work that would become the foundation of his later work. During the mature phase of Gaudí’s career, he began to leave the historical style behind and dominant with his distinctive style – which is later known as Gaudinian aesthetics.

Pere Milà and Roser Segimon, an influential couple from the upper social class in Barcelona, purchased this 1,835 square meters house and commissioned Antoni Gaudí to build a new property. Part of the apartment was planned to be the home for the Milà family, and rent out the rest. 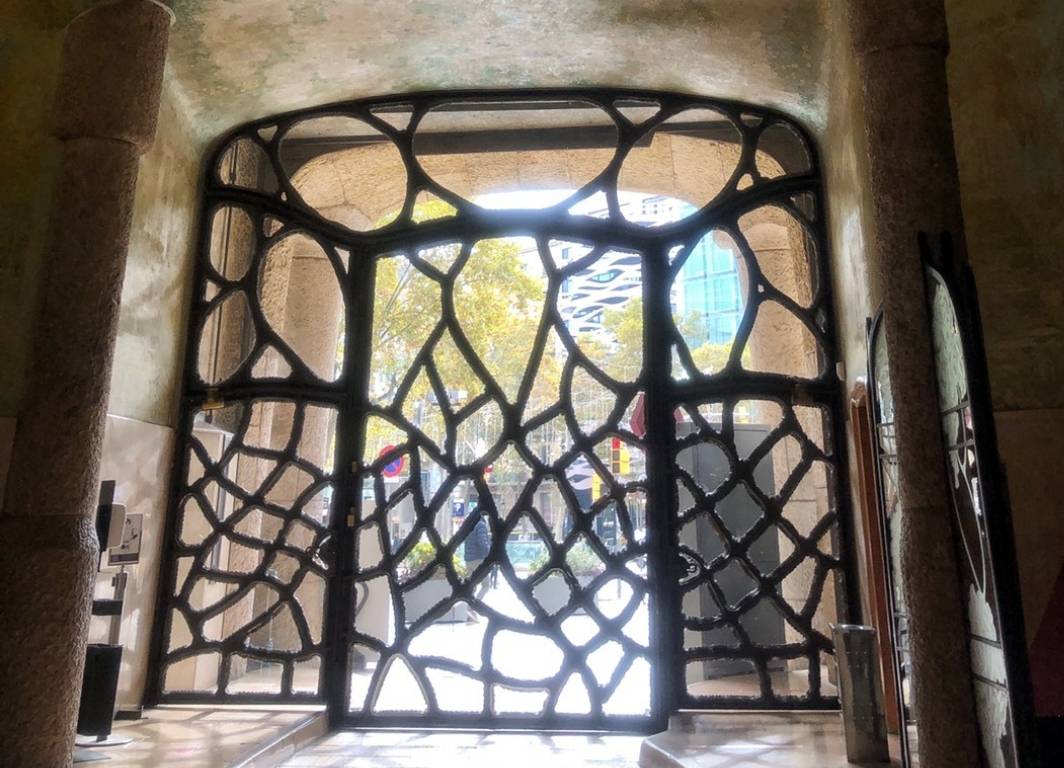 The wrought-ironwork entrance door is one of the first eye-catching elements a visitor can see without entering the building. Antoni Gaudi designed the door to facilitate the entry and exit movement. The door structure allows opening in the middle for vehicles and on the side for people to pass through.

Antoni Gaudi combined the wrought-iron with protected glass pieces in the lower part and luminous at the top. The irregular shape spyhole design was inspired by nature or natural form, which is another vital characteristic of Gaudi’s style. The transparency provides the see-through function that allows communication without opening the door. 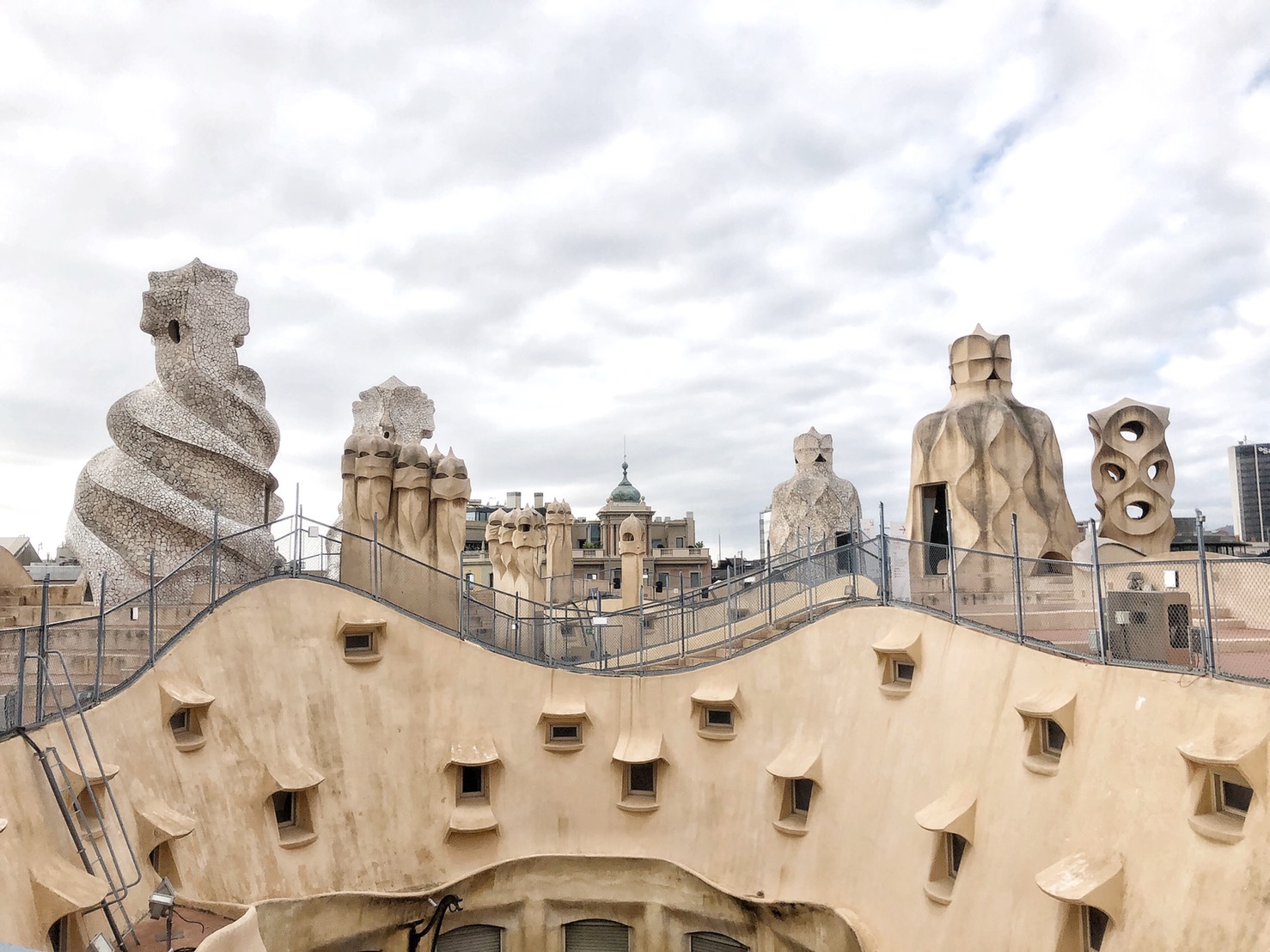 Standing on top of Casa Mila roof terrace takes you into a major Gaudi zone. This sea bed roof terrace features staircases access to the attic, ventilation towers, and chimneys called “The Warrior.” Surrounding Casa Milà’s rooftop is the spectacular views of Barcelona.

The warrior rooftop is where both architecture and functionality dance in harmony.

Gaudi’s original plan was to protect the sculptures with trencadís techniques, which broke tile mosaics by cementing together random shards, ceramics, stone, bottles, and other materials. These materials can provide an aesthetic function, but they also served the purpose of waterproof protection. 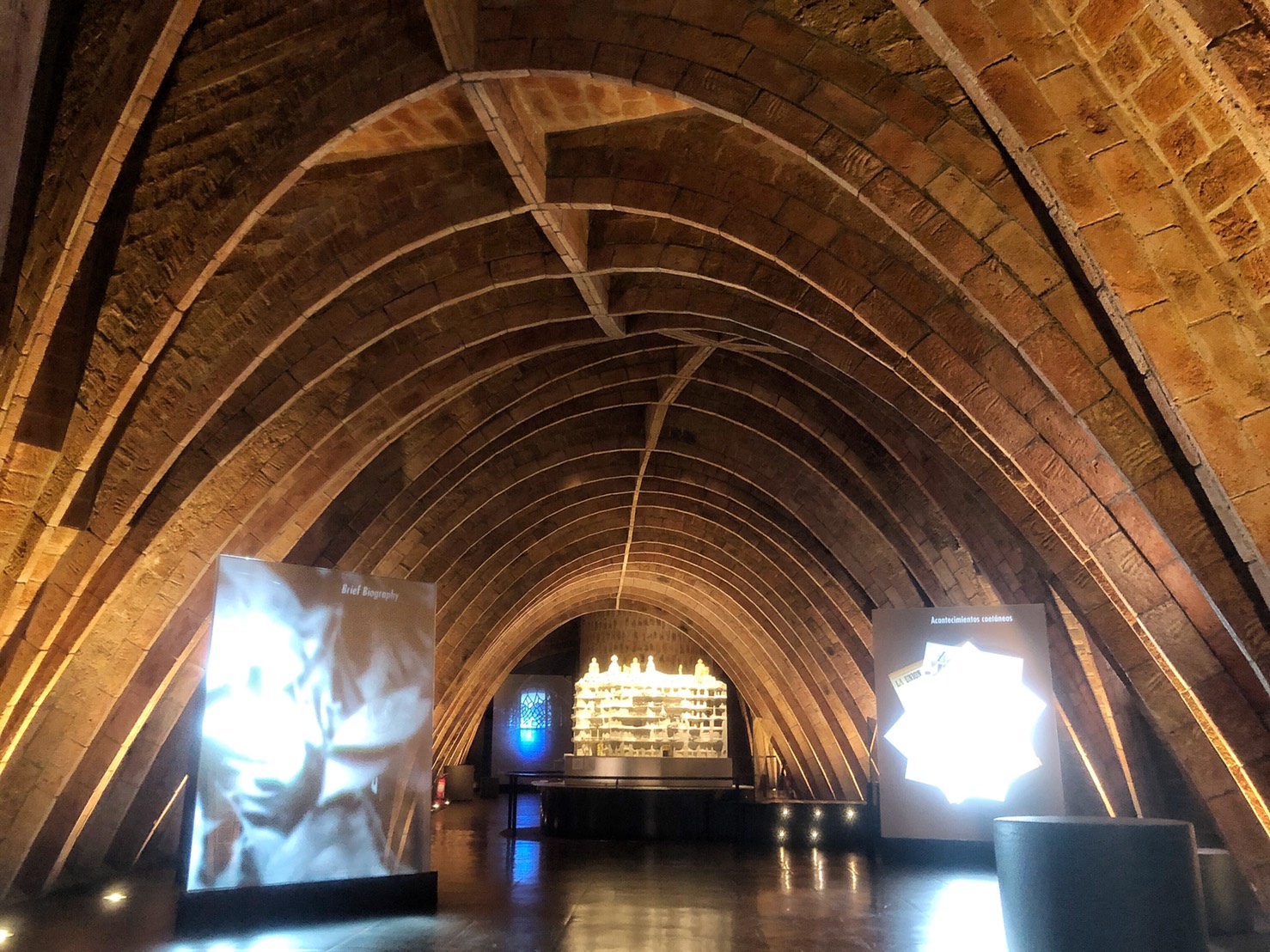 The attic is the second layer of Gaudi’s double roof theory. Gaudi said: “Just like people have a hat and a parasol.”; the architect constructed the attic with “self-sufficient” in mind. It is a perfect example of a technical and mechanical solution: insulation, lighting, and ventilation.

Antoni Gaudi used bricks materials to build 300 flat bridges and the arches that rise to the ceiling. These whale-like arches are easy to construct, able to support the roof terrace without adding buttresses, which could avoid adding more weight to the building. Last but not least, it also acted as an insulating air chamber for Casa Milà.

Attic used to be where servants worked as the laundry areas, and today is home to Gaudi’s exhibition. 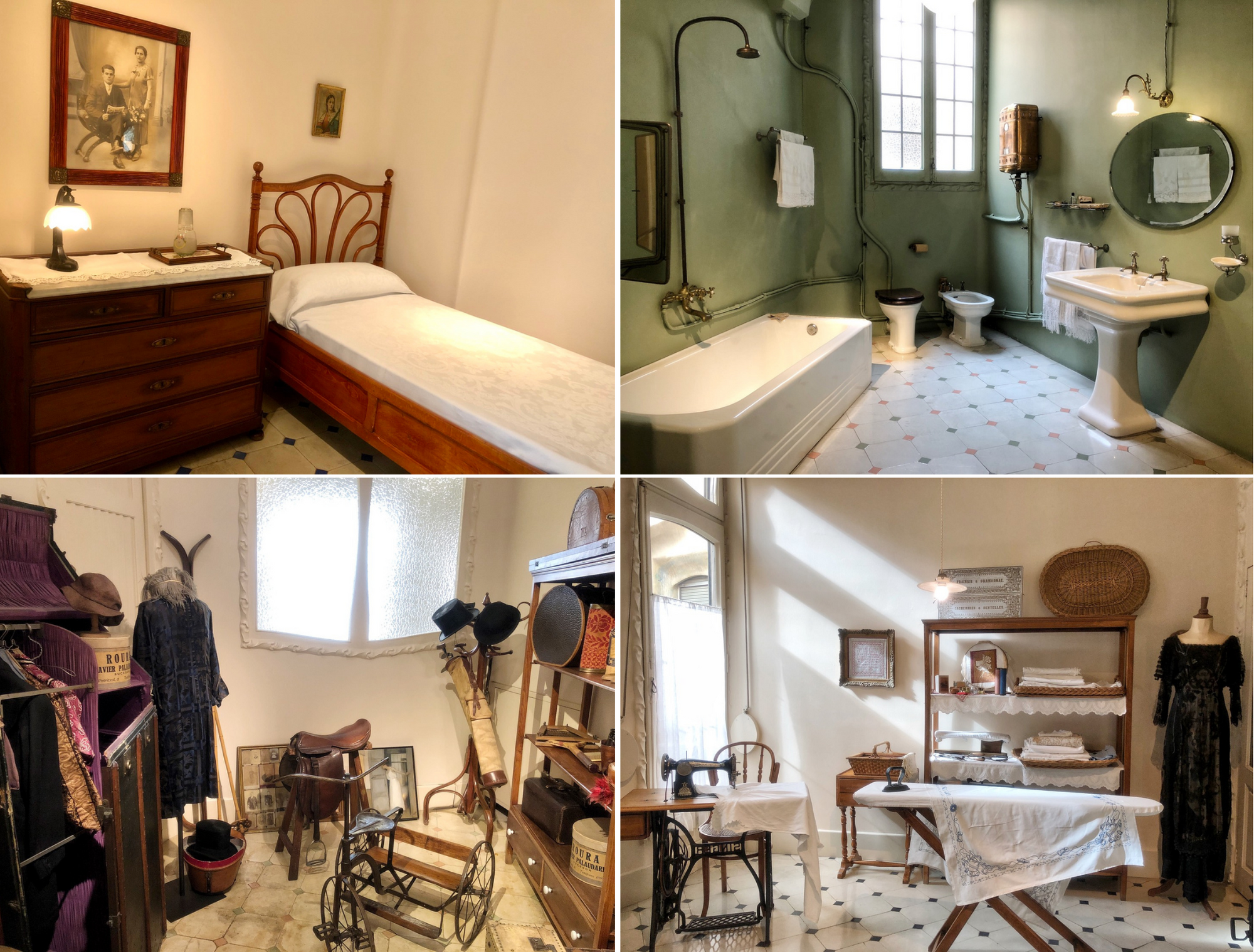 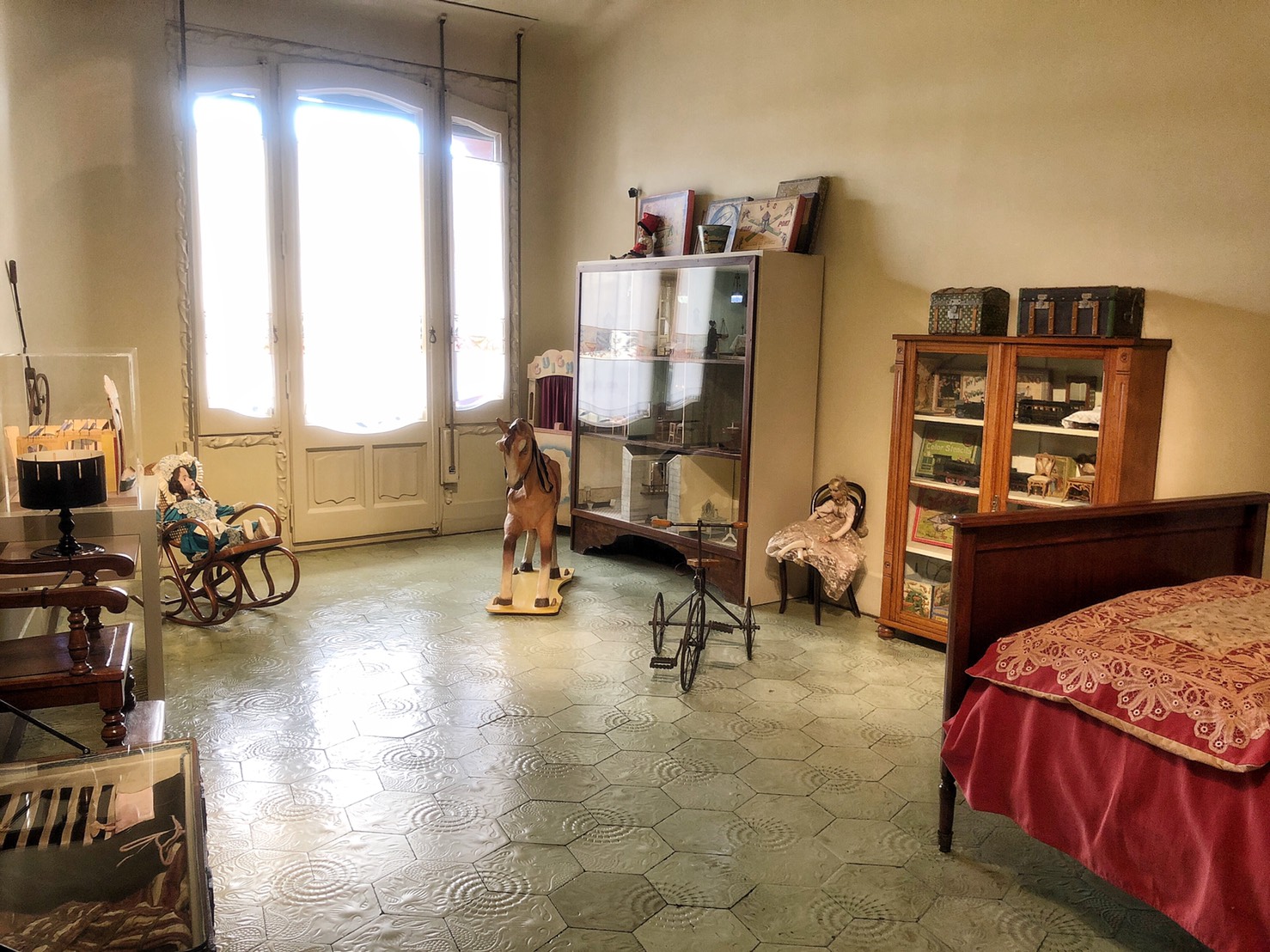 The floor is the shape of a sea creature. 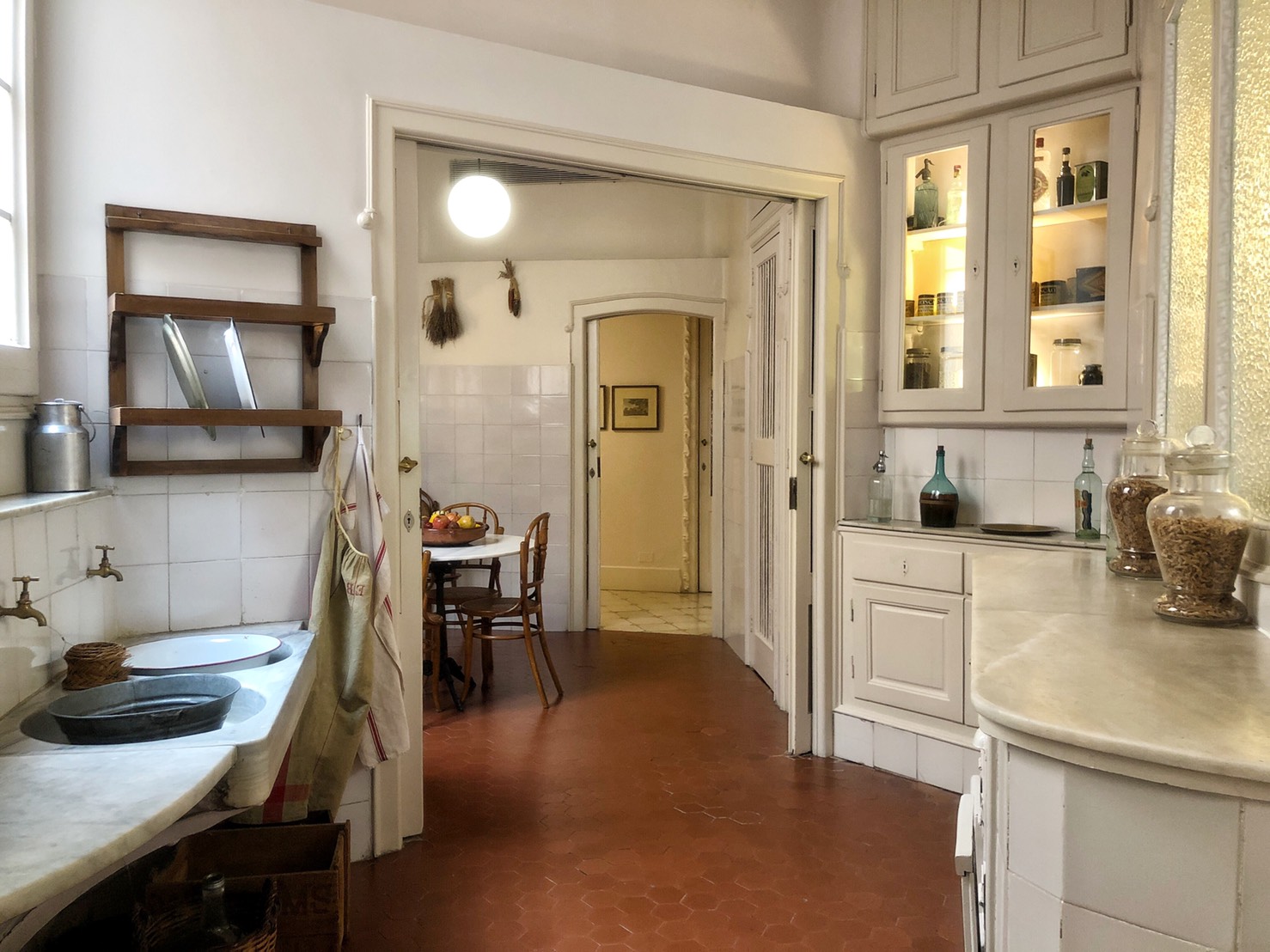 The open space kitchen was where the servants ate and prepared meals for the family. This kitchen can be separated into two rooms by a sliding door; Gaudi ensured adequate ambient light in a large kitchen. 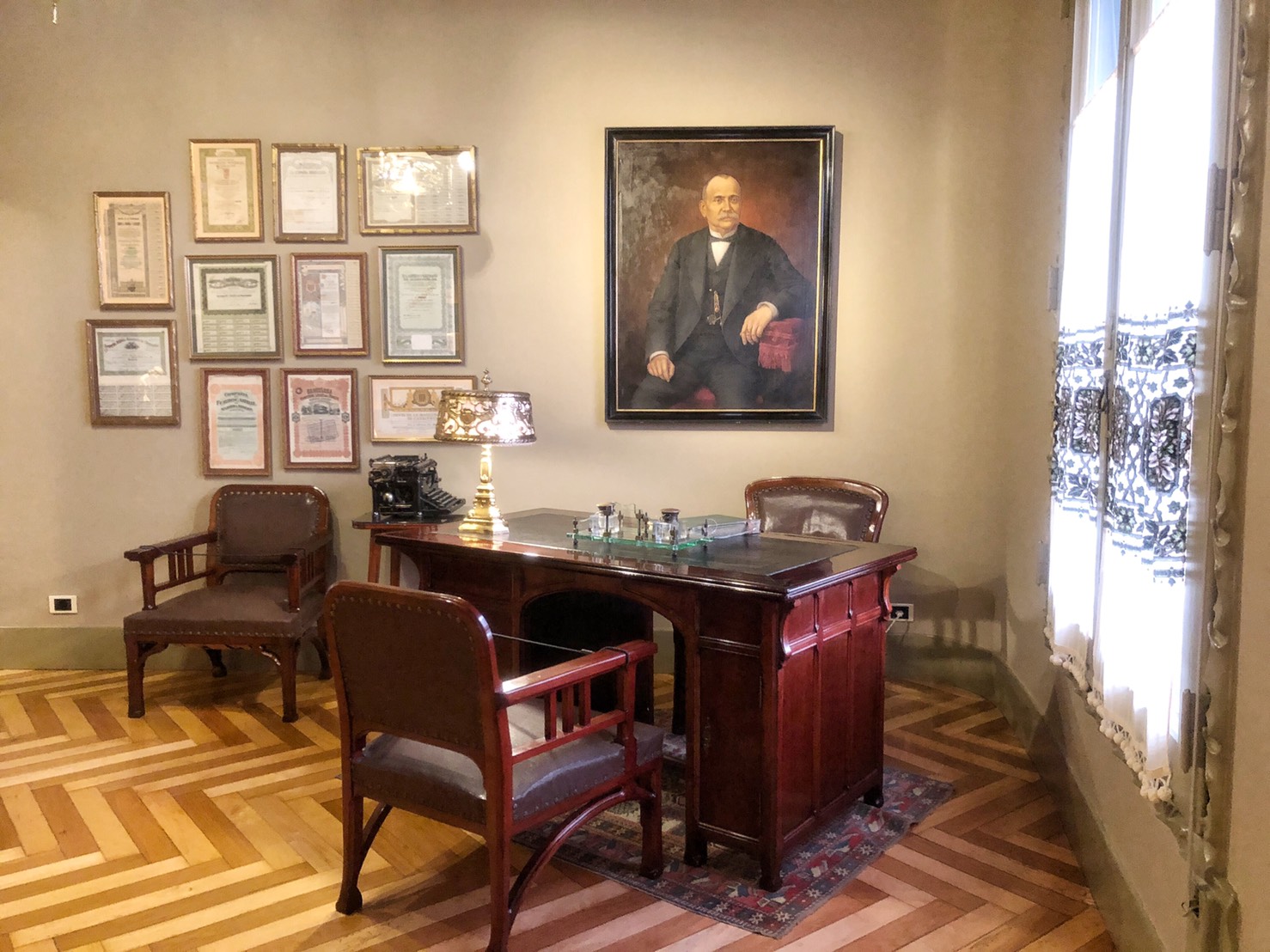 The decoration inside the office exhibition room reflects the social class of tenants. Other than family Mila, the building occupants are rent-paying tenants. In 1910, not everyone could afford to rent an apartment in Passeig de Gracià; people who used to live here were wealthy but not wealthy enough to own a property.

Today, other than the exhibition floors. There are still families who have been living in Casa Milà for more than 70 years. 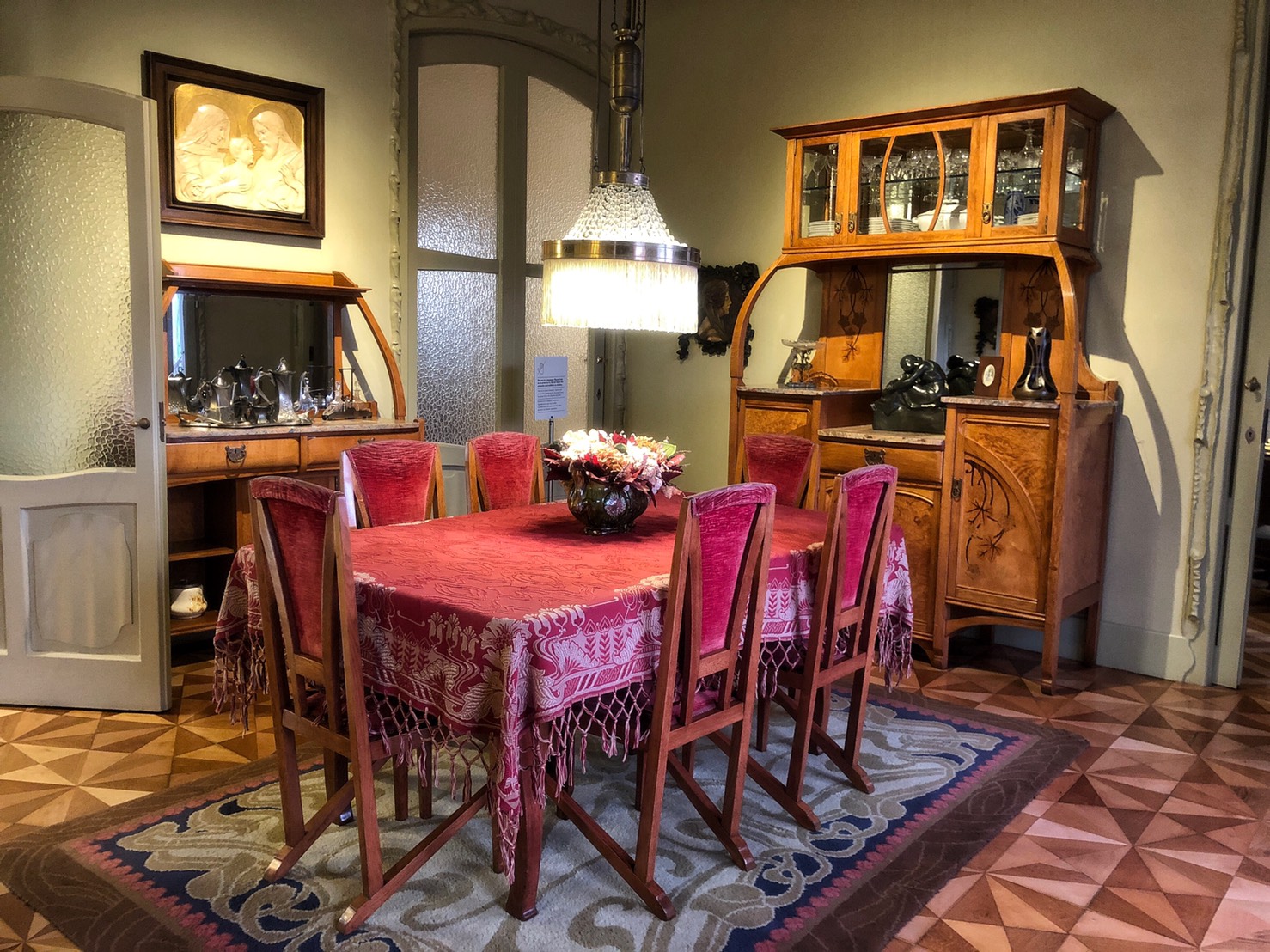 The Living room and Dining room

The living room to the dining room area is one of the most distinguished places on the floor. The exhibition room provides an opportunity to discover the interior design and furniture distribution designed by Gaudi.

The sliding door in the middle can be opened up and separated into two rooms if necessary. One of my most favorite parts of this area is the dining table designed in the 19th Century. It reflects on the “archy” no angle characteristic of the building.

The Master bedroom gives an excellent insight into the tenant’s lifestyle in the early 20th Century. A simple but spacious room combines perfect light with privacy and decoration.

Casa Milà is a family-friendly destination for members of all ages. This building is not only for people interested in architecture, art & culture, the Art Nouveau style. It is also for people who want to spend an hour admiring a piece of Barcelona’s beauty.

Besides the design, one of the important reasons I highly recommend visiting Casa Milà is the entrance tickets contributing to society, environmental, educational, and cultural projects, which benefited more than 500.000 people directly.