Pablo Picasso, one of the most celebrated artists of the 20th Century, was born and raised in Spain before spending most of his adult life in France. Picasso created over 20,000 paintings, sculptures, ceramics, and other works throughout his life.

Museu Picasso Barcelona displayed the evolution of the artist’s work in his lesser-known life, from classic portraits where he was still crafting the skills to Cubism.

Museu Picasso Barcelona is located in the La Ribera neighborhood of Barcelona. Many buildings in this area date back to the 13th – 15th Medieval period, and it was a prestigious area for wealthy merchants and nobility.

The museum displays Picasso’s work chronologically, accompanied by historical information. I saw the development of Picasso’s style and realized that Cubism is not the only technique in which he was prolific. 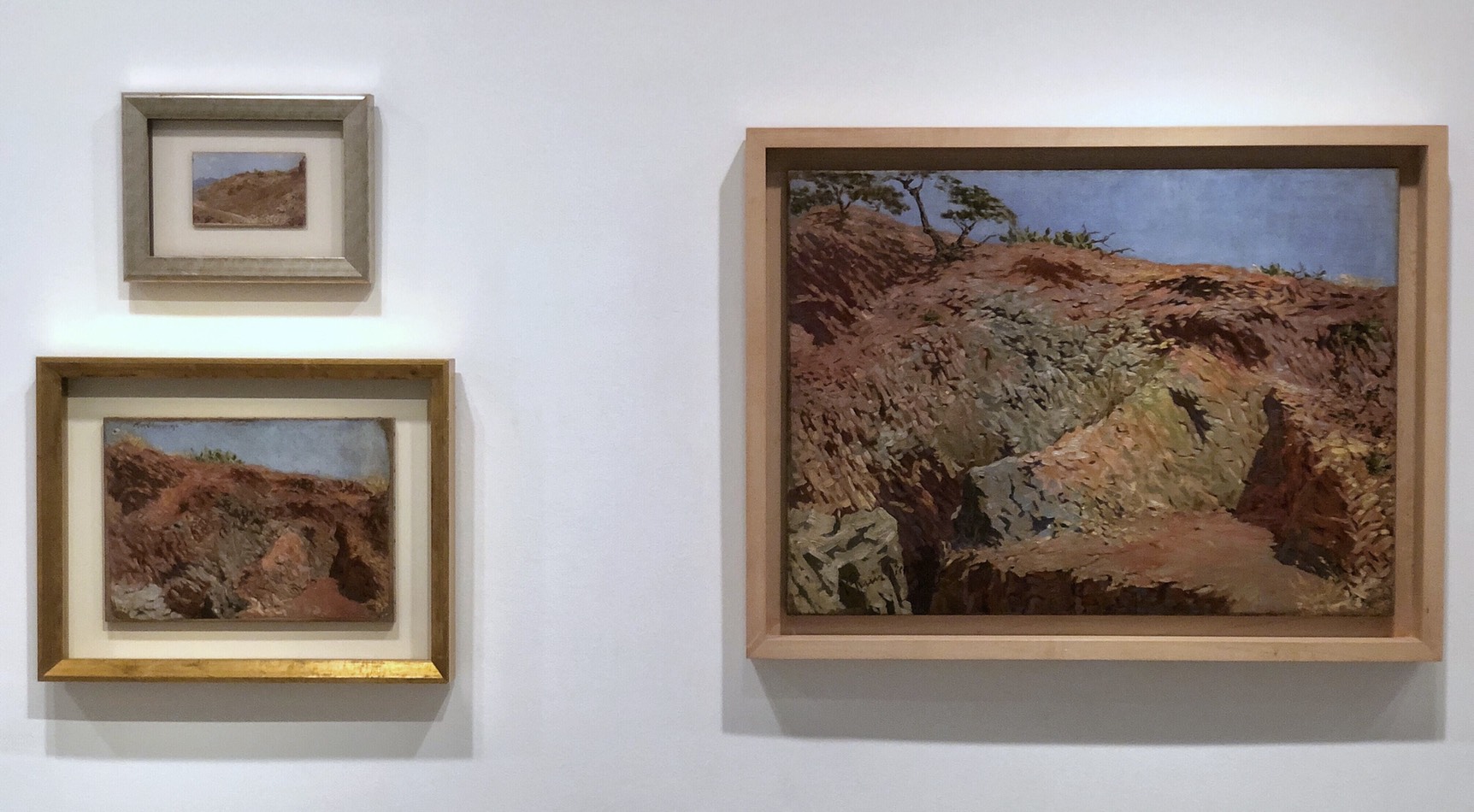 Pablo Picasso was born in October 1881 in Málaga, a port city in Southern Spain. His father – José Ruiz y Blasco, who was his first teacher, played a significantly influential role in his early childhood artistic development.

In 1891, Picasso moved to A Crouña Galacia with his family. Some people have called this time an “unknown period,” yet a critical time of artist formation.

The young Picasso joined the school of Art and Craft of La Coruña, accompanied by his father. During this time, he drew in charcoal and ink, especially fascinated by his immediate environments, such as street views and landscapes.

As the young Picasso’s technique was becoming more refined, his father encouraged him to try oil paintings, which is where he began to mature his brushstrokes. 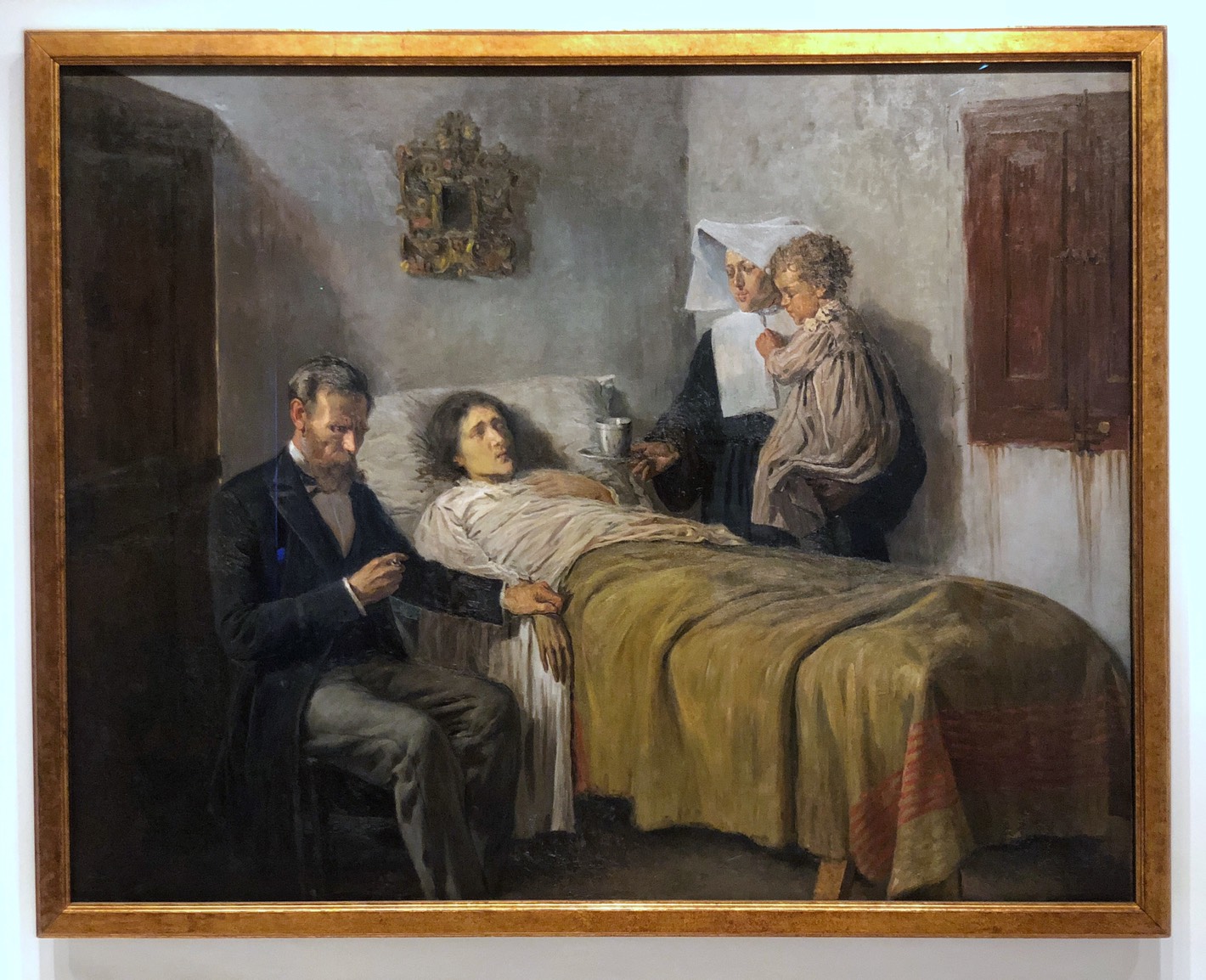 In 1895, 14-year-old Picasso moved to Barcelona with his family and continued his education at the La Llotija Fine Art School. He focused his work on a series of urban aspects linked to his immediate surroundings, where he practiced outdoor painting.

At age 15, Picasso was mature enough to take on a large and ambitious composition and created one of his early year masterpieces – Science and Charity; Science represents Picasso’s father, who was the model for the doctor, and the nun was the charity. Science and Charity were awarded an Honorary Mention at the General Fine Arts Exhibition in Madrid in Spring 1897 and the Gold Medal at the Provincial Exhibition in Malaga. 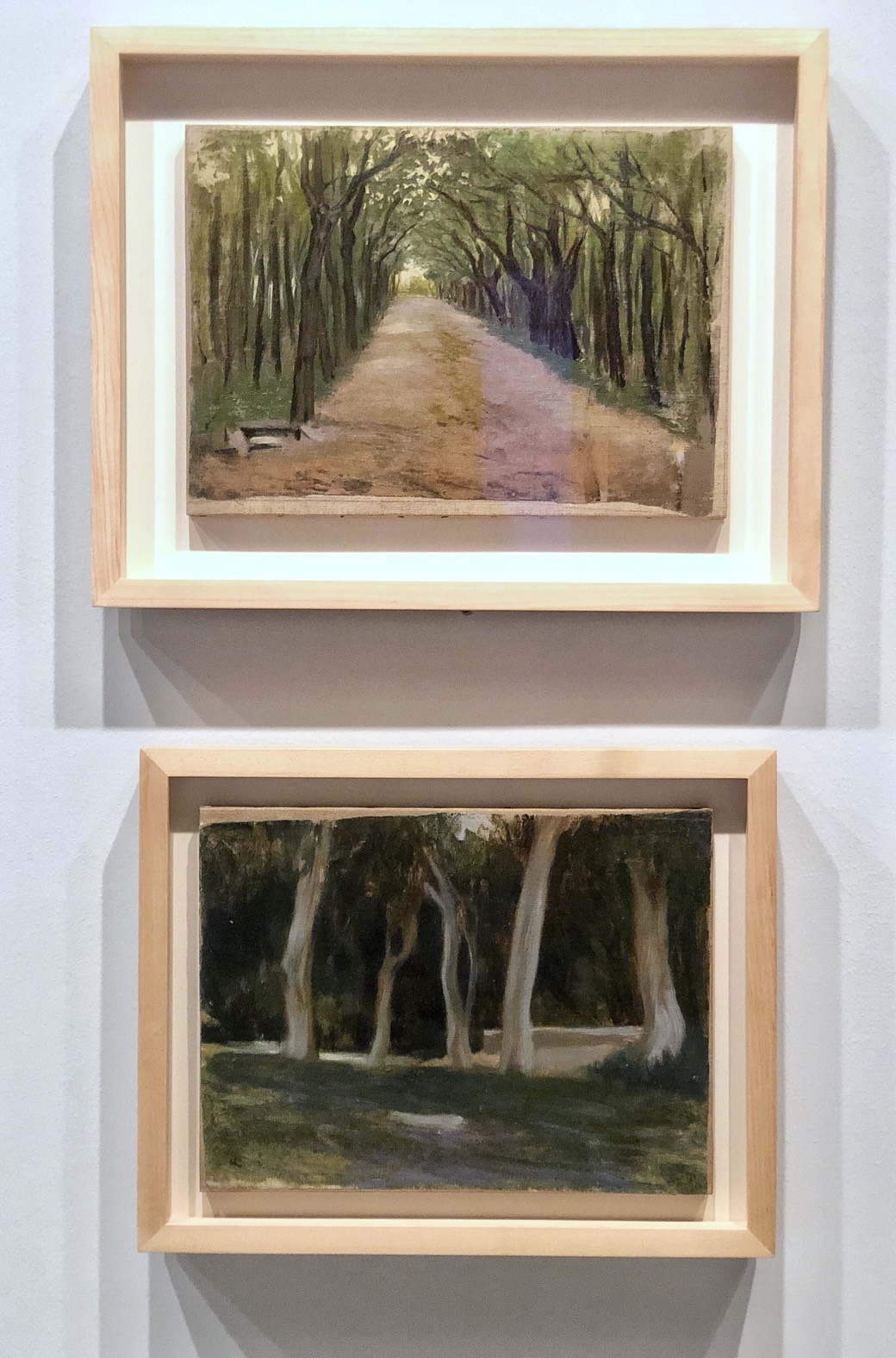 Picasso’s father convinced a 16-year-old Picasso to consolidate his apprenticeship as an artist at San Fernando Royal Academy of Fine Art in Madrid. Therefore, Picasso left Barcelona and spent one academic year in Madrid for the first time. During his stay in Madrid, Picasso would spend days admiring masterworks at El Prado Museum. 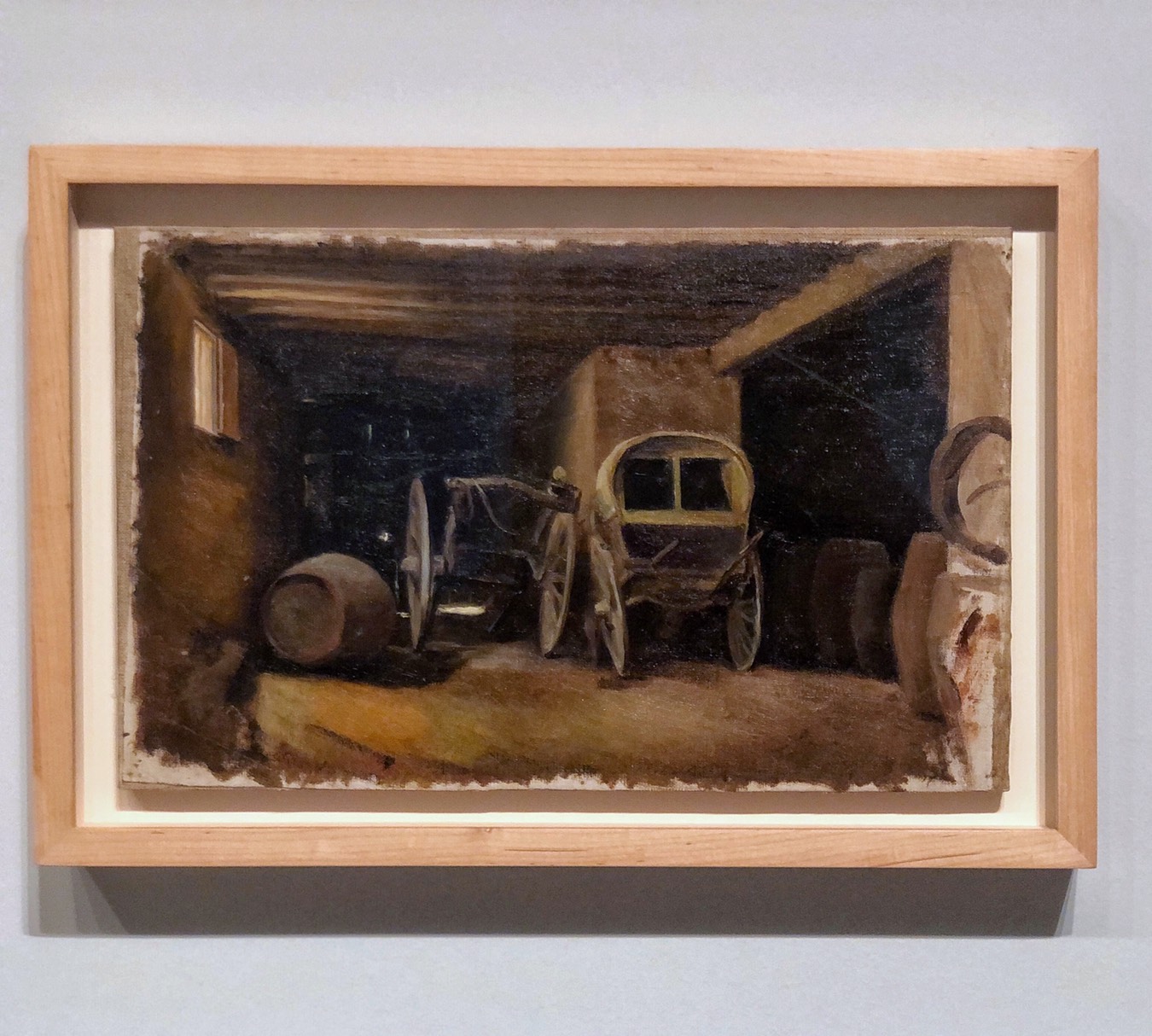 In June 1898, Picasso returned to Barcelona, and shortly after that, he left for Horta de Sant Joan under his friend Manuel Pallarés’s invitation.

“Everything I know I learn in Pallarès village” – Pablo Picasso

During his time in Horta de Sant Joan, his work mostly focused on the countryside, such as the local inhabitants and the local landscape. 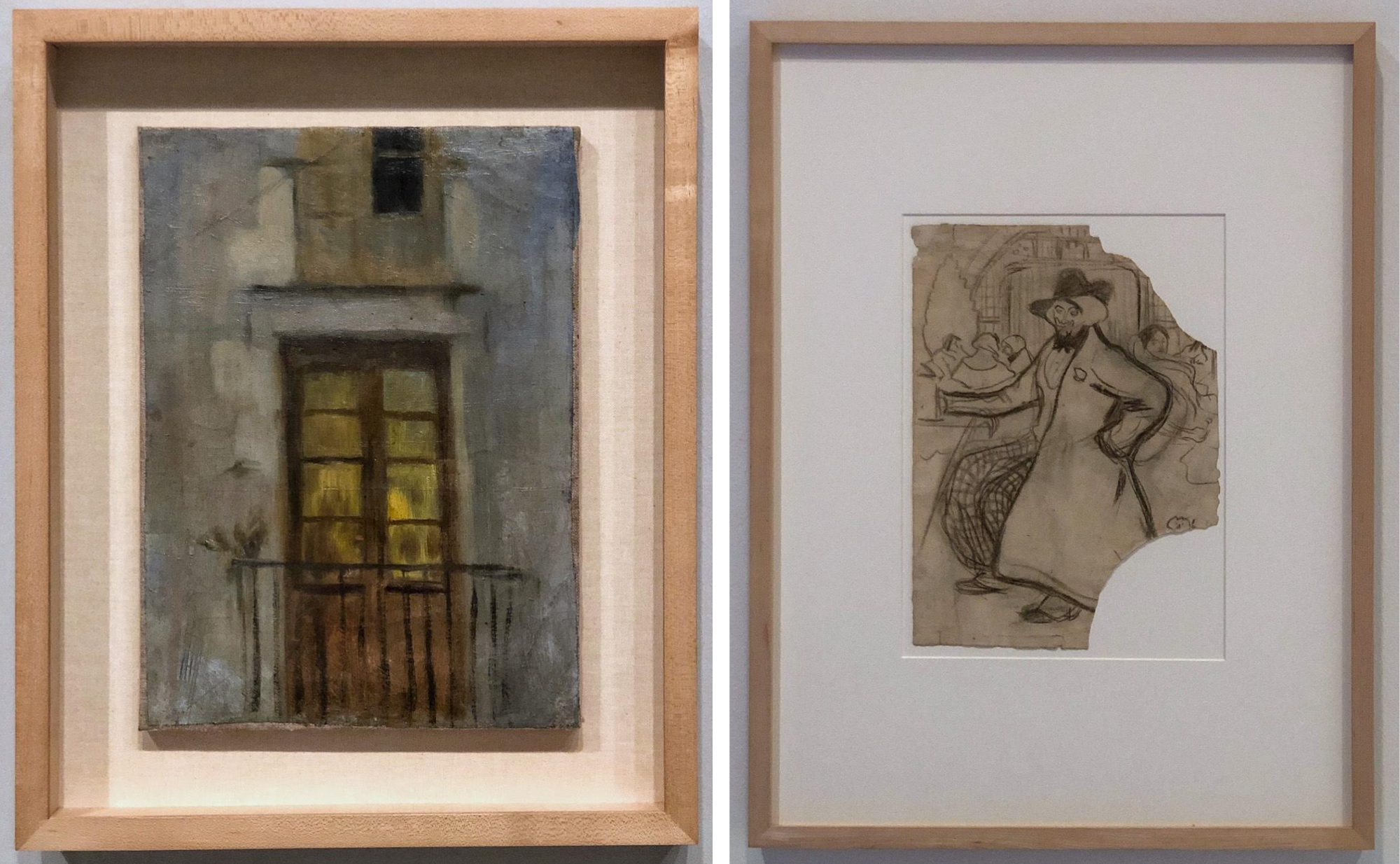 After returning to Barcelona from Horta de Sant Joan in January 1899, he became a member of the Catalan avant-garde.

The Avant-garde (n) -the painters, writers, musicians, and other artists whose ideas, styles, and methods are very original or modern compared to the period in which they live, or the work of these artists – According to Cambridge Dictionary

The Catalan avant-garde’s meeting point was at Els 4 Gats, a famous cafe in the heart of Barcelona. The owner of Els 4 Gats was Pere Romeu, who worked as a waiter in a famous french cabaret, the Le Chat Noir, and later decided to open a similar business offering tavern food and live music, which was quickly adopted as a meeting point for artists.

The influence of Catalan modernism is evident in Picasso’s later work, and the artist had his first individual exhibition at Els 4 Gats in February 1900. 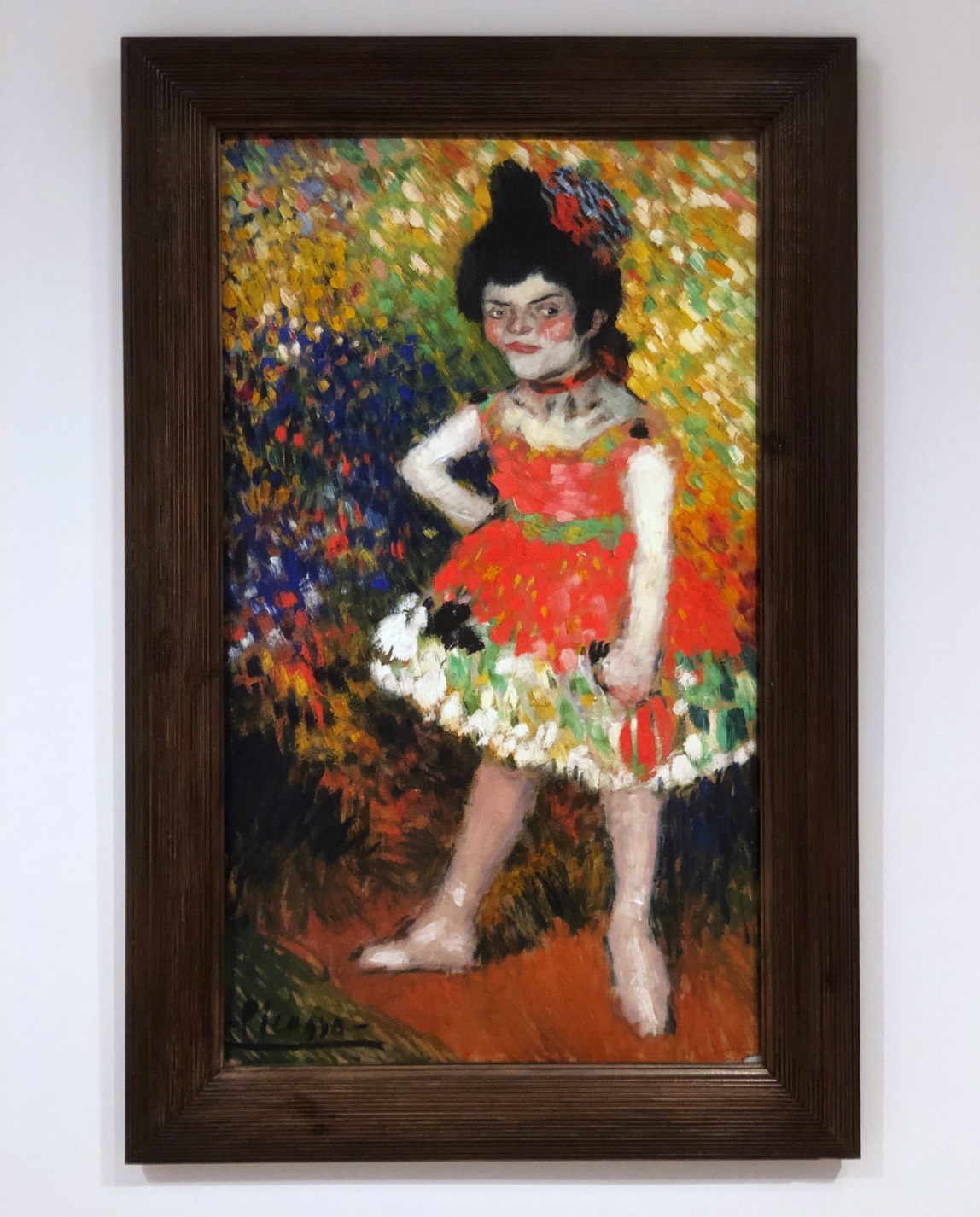 Pablo Picasso set his foot in Paris for the first time in 1900 when he was 19, accompanied by his friend Carles Casagemas, a Catalan painter and poet. During his time in Paris, the discovery of the Impressionists, Neo-impressionist, nabis, and Pointillists profoundly impacted him.

Picasso’s initial mission in Paris was to cover the Exposition Universelle as a journalist for the Barcelona journal Catalunya. Paris allowed Picasso to experience life in the art capital, where he had direct contact with the avant-garde in Paris. A few years later, he was challenging Matisse for the leading position of the French avant-garde. 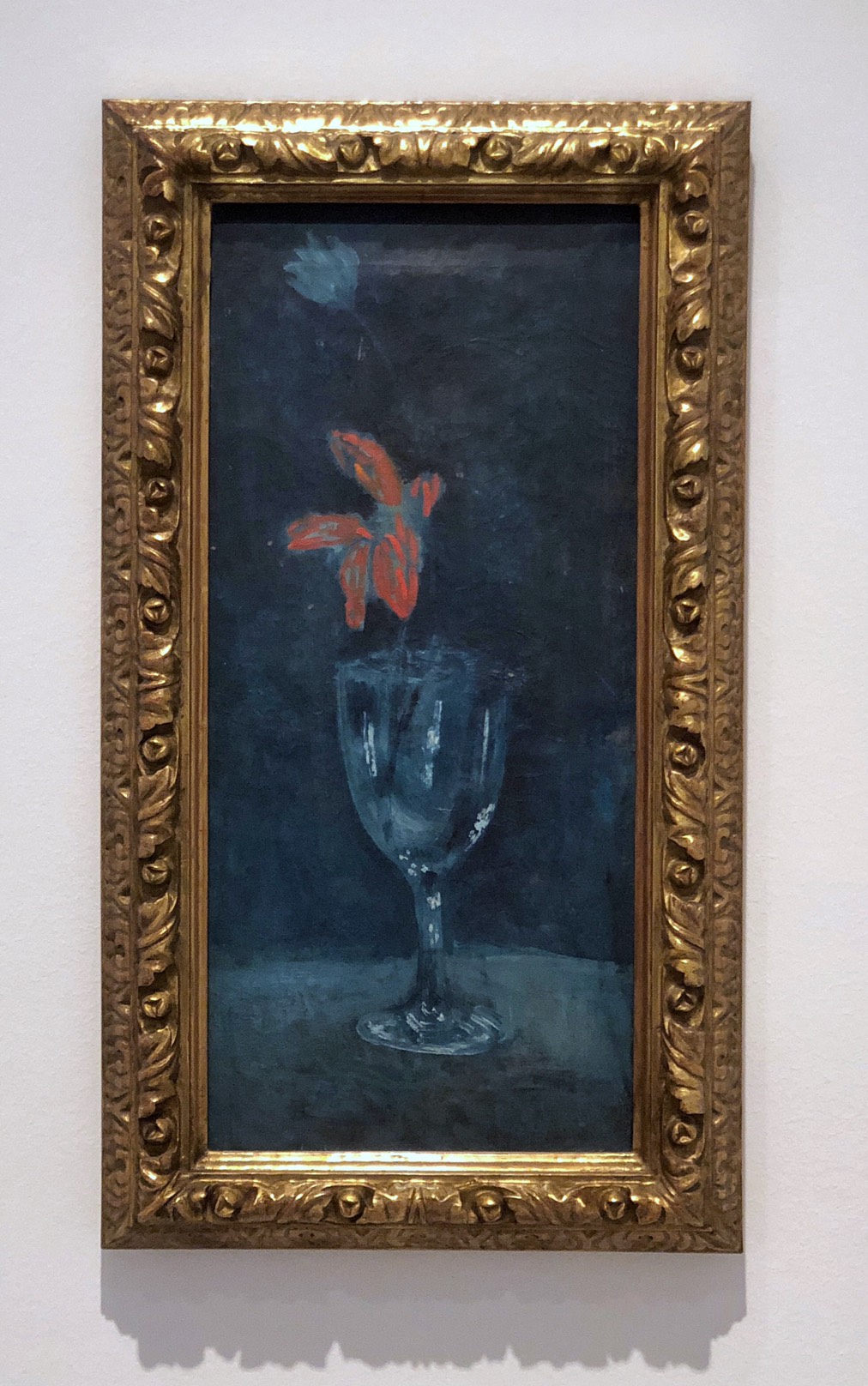 The Death of Carles Casagemas in 1901 was a dramatic event for the young Picasso, which led to his Blue and Rose period. The color blue would monopolies his compositions. 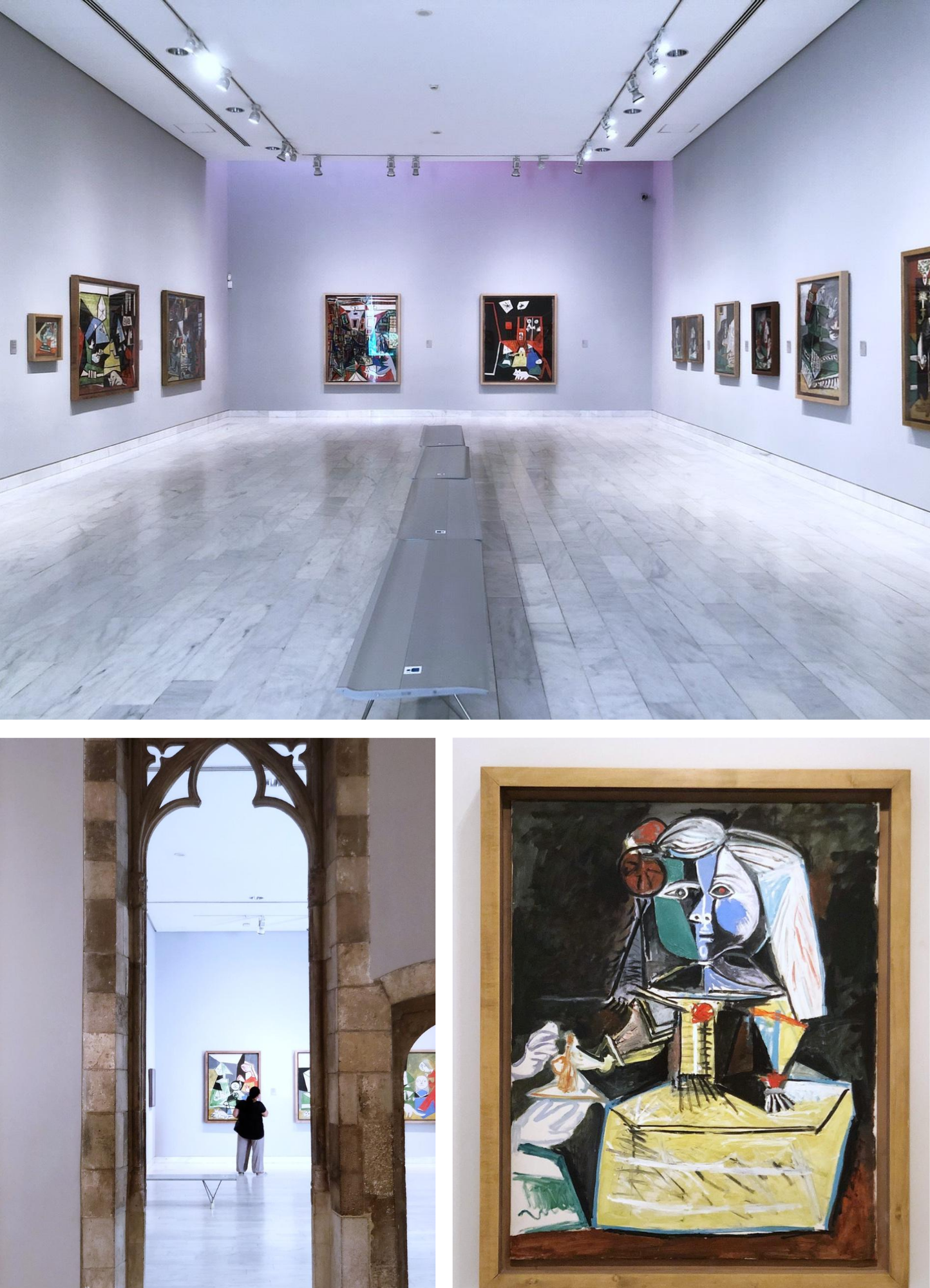 Las Meninas is the final part of the exhibition and the area I have enjoyed the most.

In 1957, Picasso carried out an extended series of exclusive analyses on Las Meninas of Diego Velazquez, the leading artist in the court of King Philip IV of the Spanish Golden Age. The set contains 58 works donated to Museu Picasso Barcelona in May 1968 in memory of Jaime Sabartés, who also died the same year. 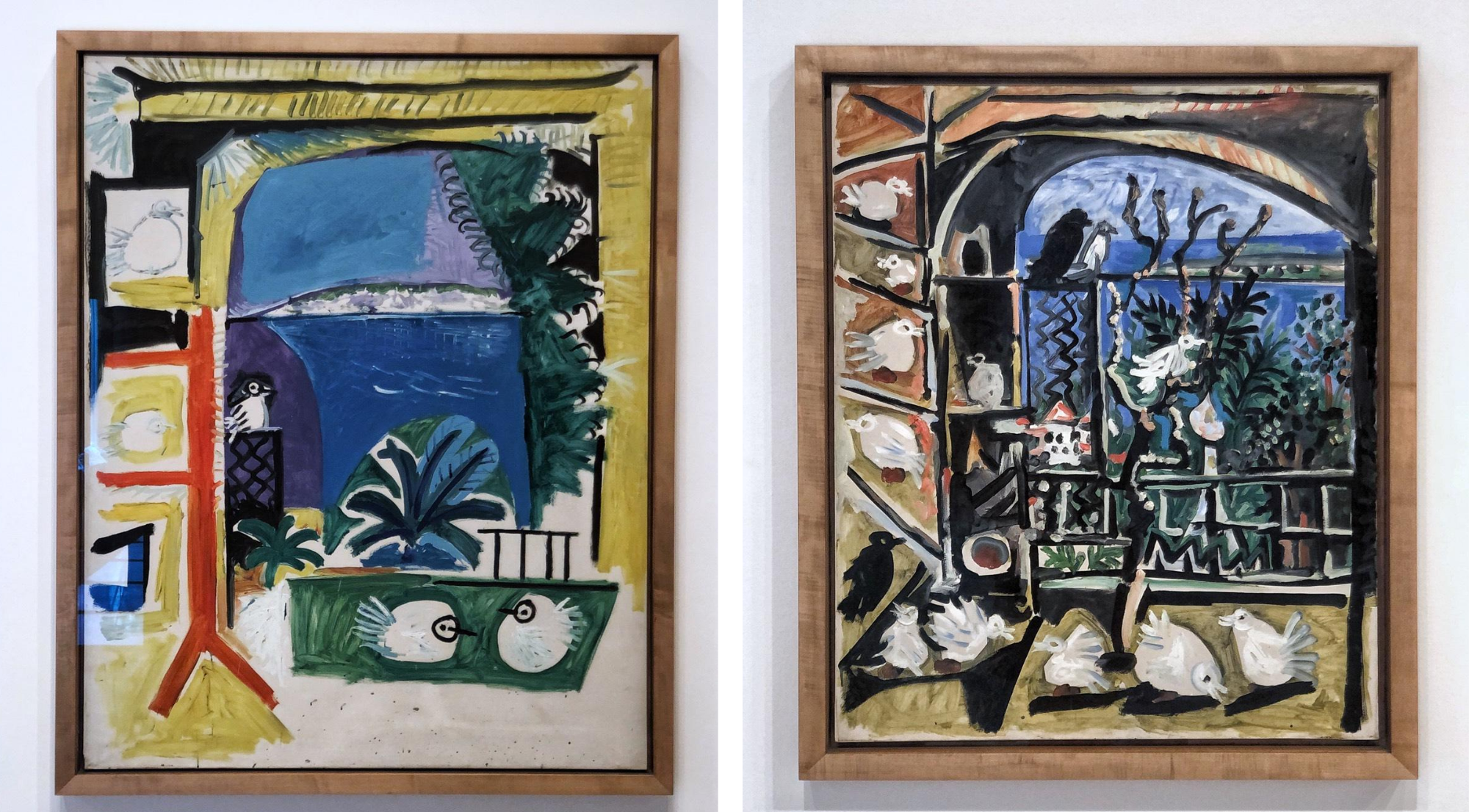 Picasso took a break from analyzing and interpreting las Meninas and focused on the balcony in his studio and the distant view of the bay of Cannes.

Ceramics began when he moved south of France after World War II between 1947 and 1963. Forty-one of the forty-two ceramic pieces owned by the museum were donated by Picasso’s widow, Jacquline, in 1982. The Mediterranean light and atmosphere that define Picasso’s work from this period were reflected in his ceramics. 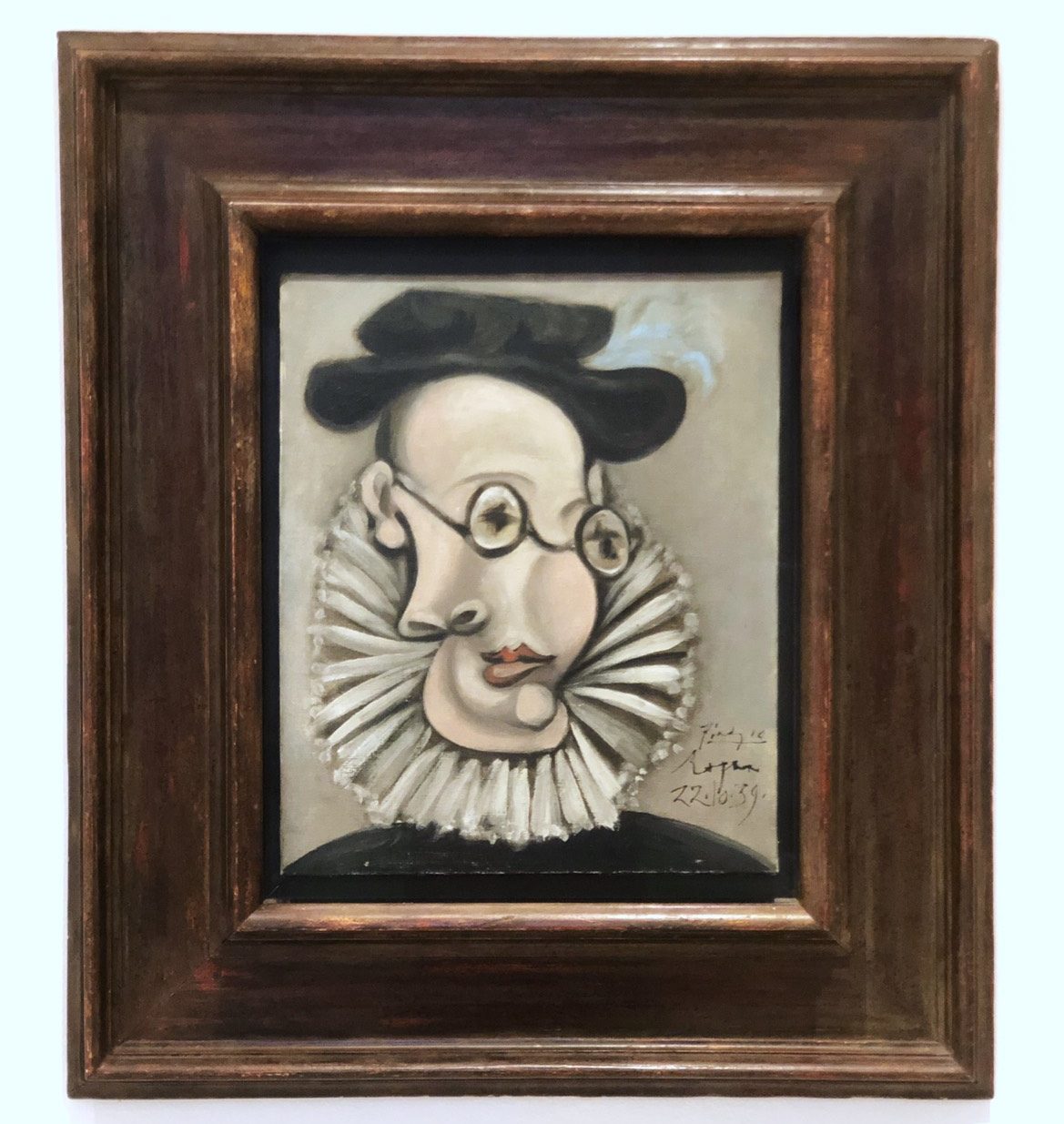 The Founder of the Museu Picasso Barcelona – Jaume Sabartés

Jaume Sabartés’ (1881 – 1968) was a close friend of Picasso, dating back to their early childhood when both were still hunting for an opportunity in Barcelona’s artistic circle. Sabartés became Picasso’s personal administrator in 1935.

Pablo Picasso is undoubtedly the most important artistic figure of the 20th Century; I always have known Picasso by his most distinct style and Cubism creations before moving to Spain. But I left the museum much more educated on Picasso’s work and life.