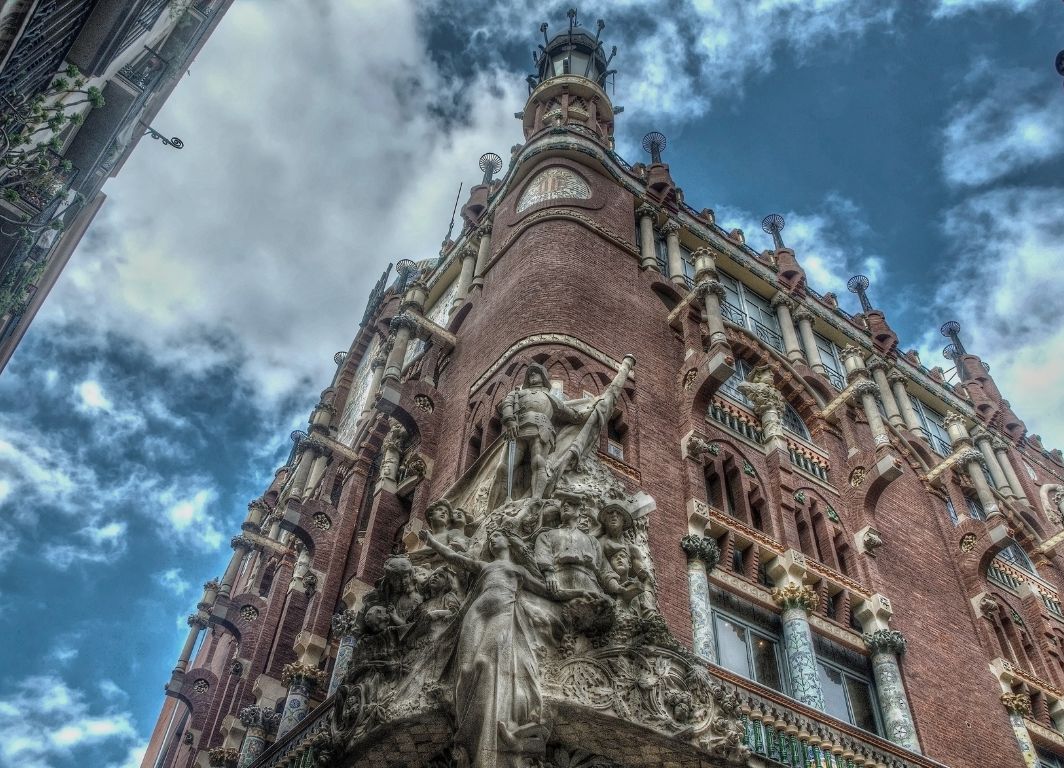 Palau de la Música Catalana is a stunning Catalan Modernista architecture designed by Lluís Domènech I Montaner. It was built between 1905 to 1908 on behalf of the Orfeó Català, a choral society found by Lluís Millet and Amadeu Vives in 1891, which was the leading force in the Catalan cultural movement, also known as the Renaixença (Catalan Rebirth).

Over the years, Palau de la Música was renovated and restored carefully. In the 80s, it focused on modernizing the Concert Auditorium, such as reinstalling the marble floor and expanded seats but still maintaining the historical layout and materials. The Last two maintenances were mainly to restore the organ, proscenium offices, dressing room, and documentation center.

Palau de la Música Catalana was constructed with various materials, such as marble, stone, brick, glass, and forge steel. The construction technique was the first that enabled the creation of large free spaces. There are 2100 seats in the concert hall, and live performances such as Gran Gala Flamenco are available to take your family or partner to a romantic date in Barcelona.

The Father of Catalan Modernism – Lluís Domènech i Montaner

Lluís Domènech i Montaner, the architect of the Palau de la Música Catalana, is also known as the father of Catalan Modernism. Lluís Montaner was Gaudi’s teacher.

When Lluís Montaner designed the Palau de la Musica, he wanted to focus on Nature, universality, and Catalonia. You will experience modernism in almost every corner of the monument, such as no straight line but rather round or uniquely twisted. 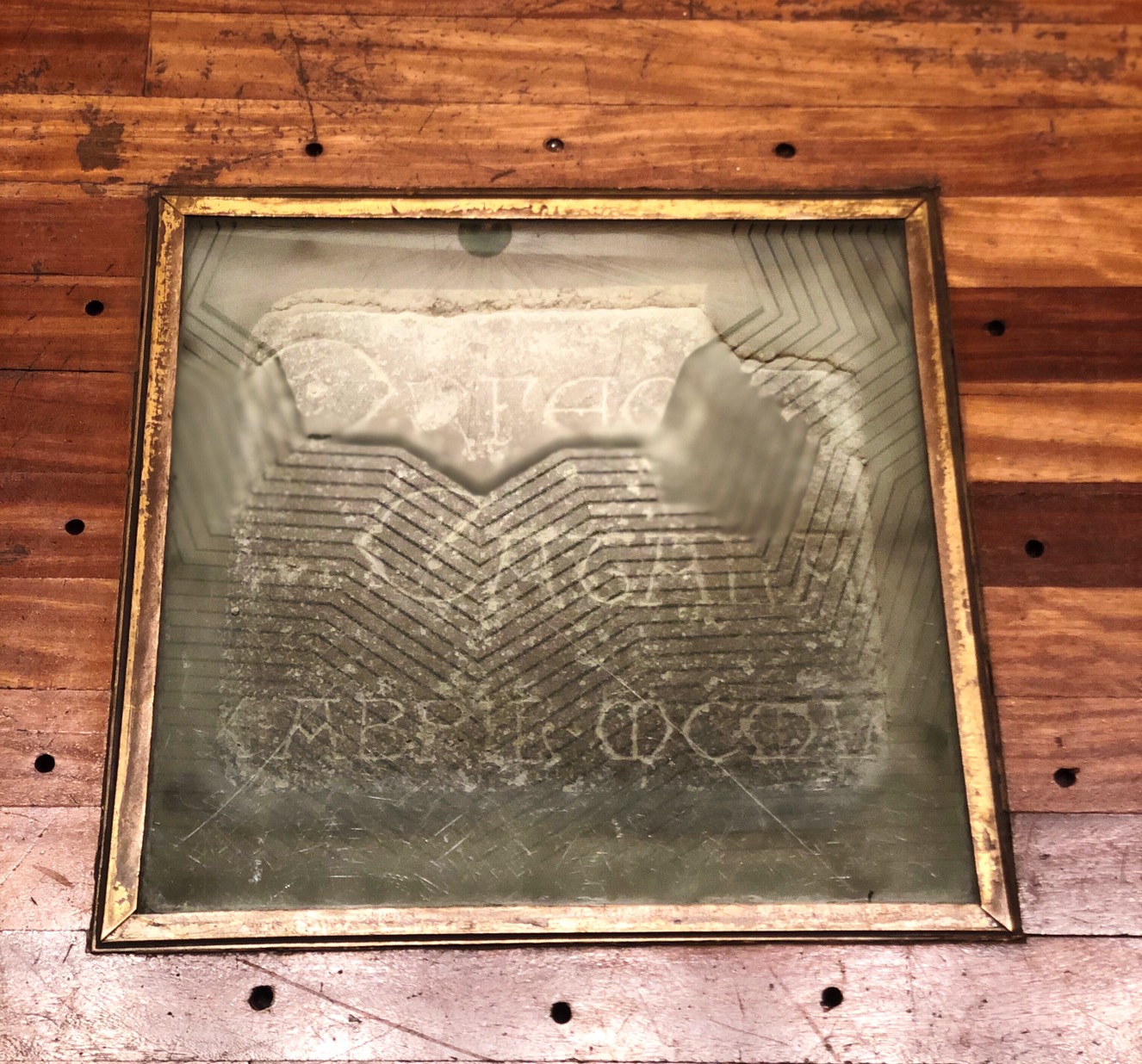 The Rehearsal Room of the Orfeó Català

The Rehearsal Room of the Orfeó Català is still where the choir rehearses today and is not open to the public; In the center of the rehearsal room. The foundation stone of the building is embedded on the floor of the Rehearsal Room. 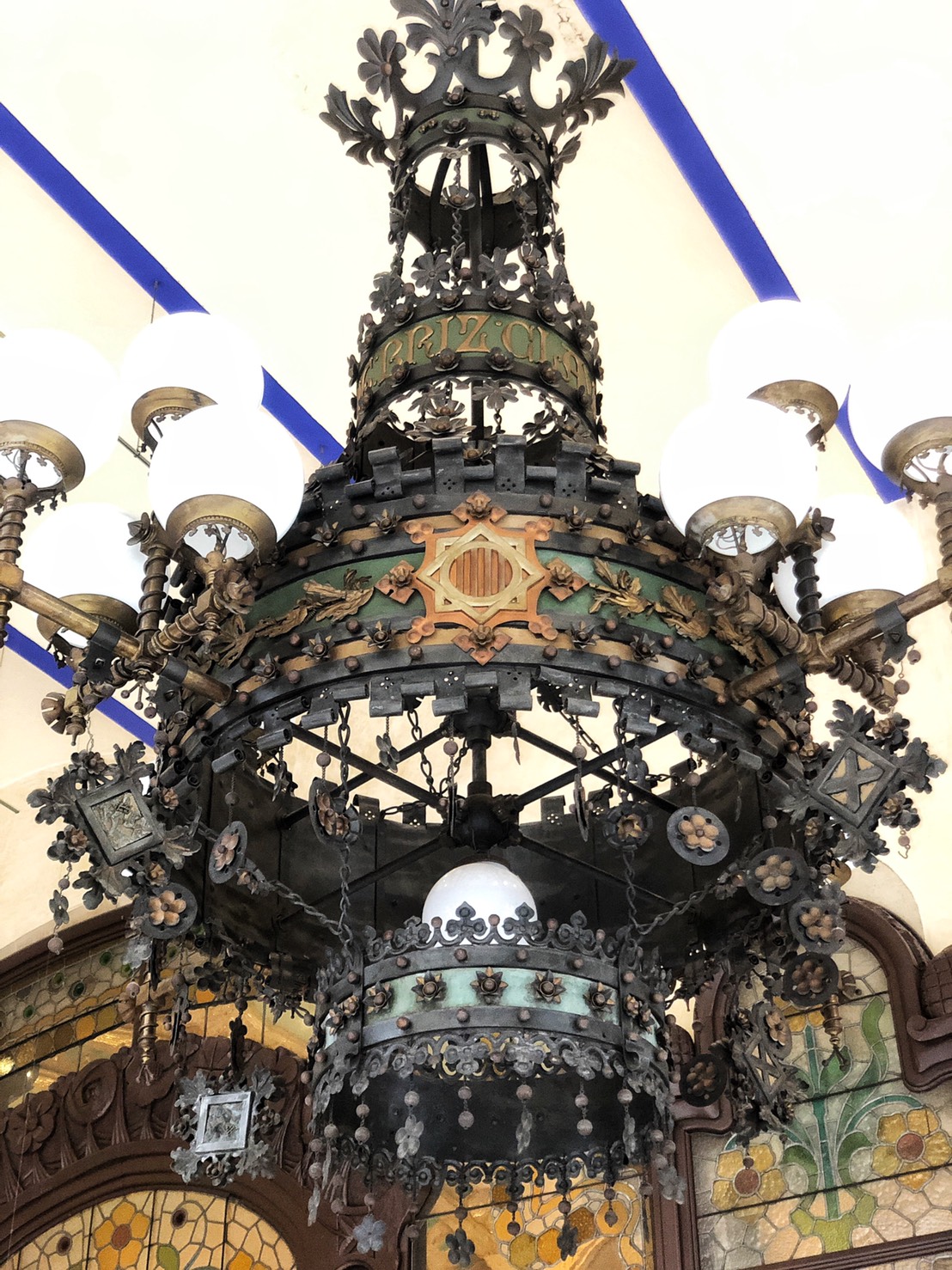 The most eye-catching element in the room is the medieval style ceiling, hanging a hundred-year-old neo-Gothic lamp weight over 300 kilograms.

Lluís Millet Room is on the second floor of the monument, a rest area and meeting point for social and musical life in the 20th Century. This room was named after the co-founder, who is also the first director of Orfeó Català for 50 years. Lluís Millet Room is a spacious room with little decoration currently using it as a temporary exhibition. 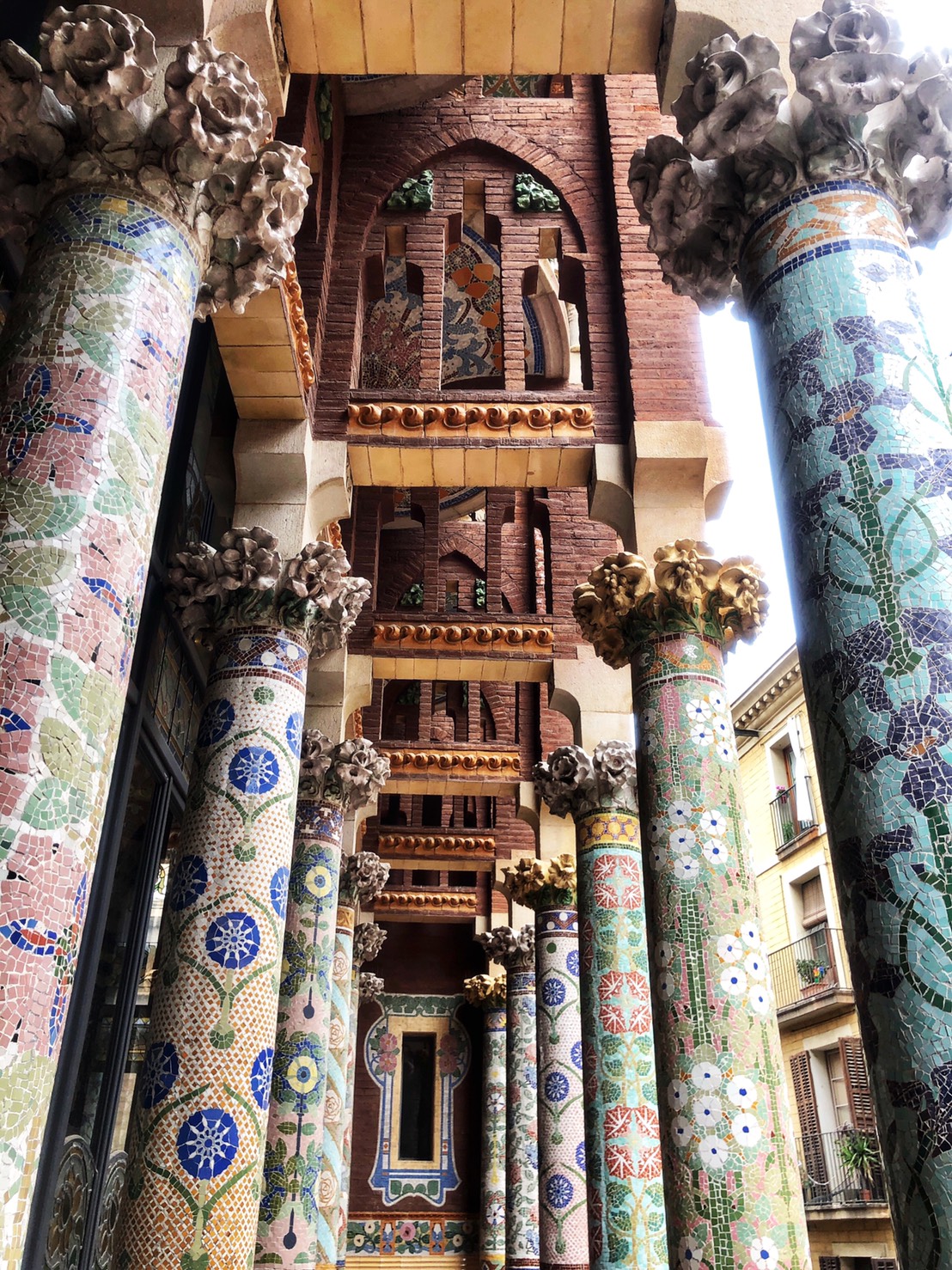 The Balcony of Lluís Millet Room

The balcony of the Lluís Millet Room is one of the most exciting parts of the Palau de la Música Catalana, behind the stained glass is a beautiful artistic path. This balcony is also part of the main façade of Palau. The terrace contains 14 columns that are made of mosaic and ceramic bound to Nature. 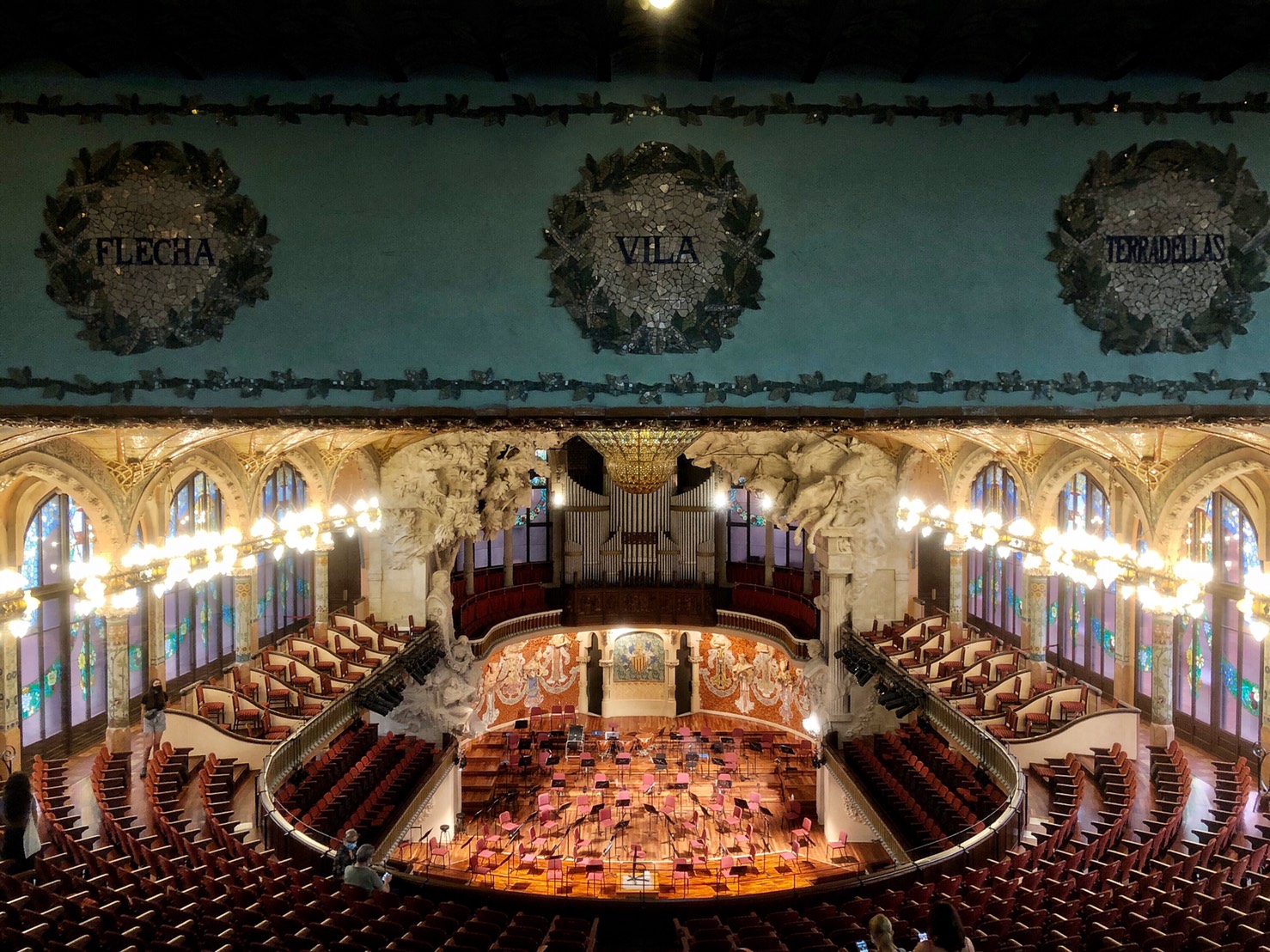 At the top of the stage is the organ, which is now the symbol of Palau. It contains more than 3,700 pipes in a romanesque style. Some are visible, and others are hidden. This organ is currently one of the few outside the church and still survives in Spain today.

On the left of the stage is the musician and poet Josep Anselm Clave, father of Catalan choral singing and promotor of associations. He managed to form over 100 choirs. Upon his death, the Orfeo Catala housed his legacy.  To the right of the stage is a bust of Ludwig Van Beethoven, which symbolizes international and symphony music. 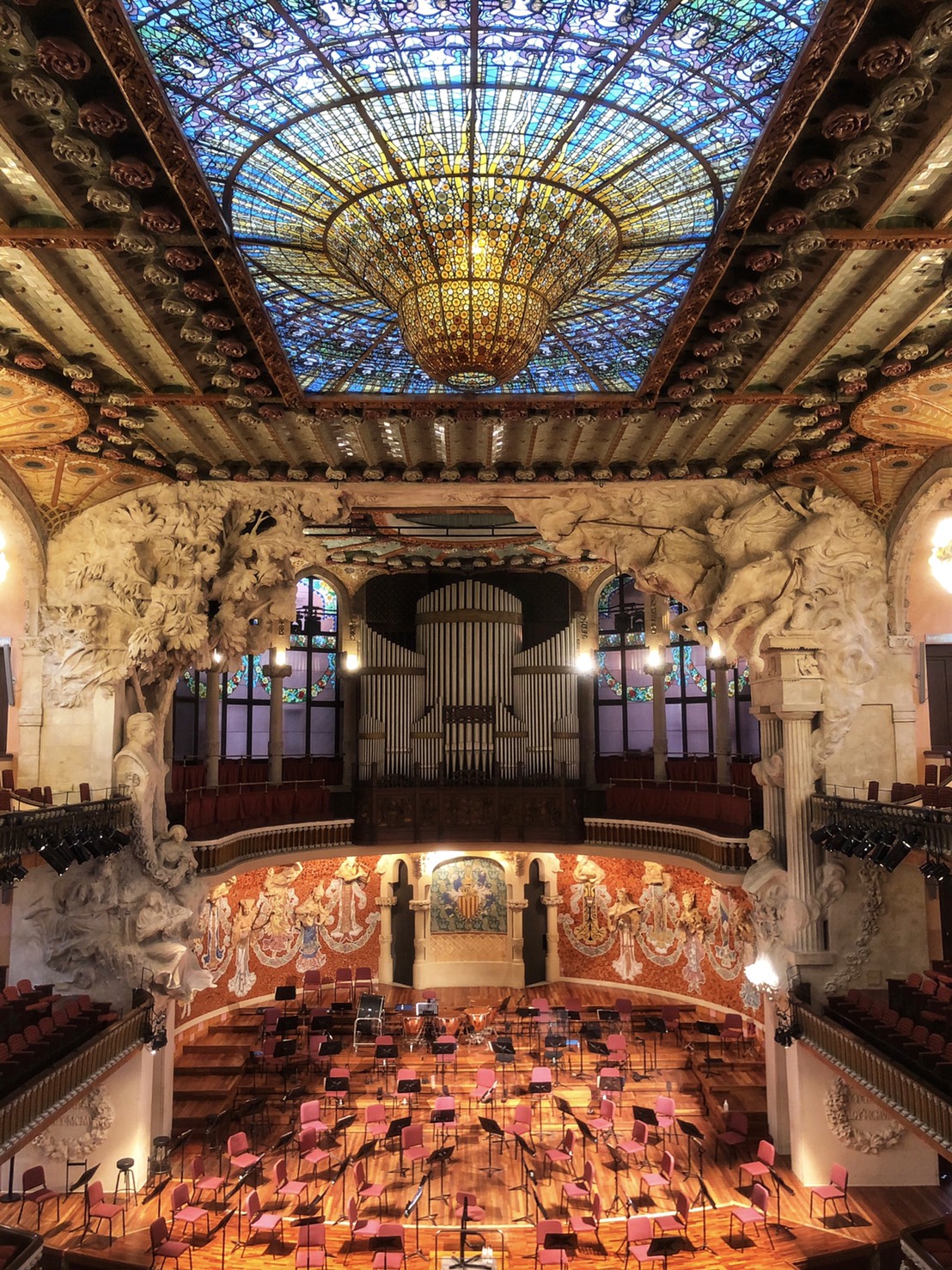 18 female figures are mounting on the wall of the center stage with different musical instruments. Some are classical, and others are from all over the world. These female figures represent music without borders, which is part of Montaner’s idea of “universality.”

These 18 figures were made with a technique called Trencadis. It is an ornamental application of Catalan Modernism, where a mosaic is created from the ceramic fragment. This part represents other elements of Montaner’s goal – “Catalonia.”

Domenech i Montaner constructed the central glass skylight. During the day, the light enters through the glasswork and brushes the Concert hall. All purple, bronze, coldest color blues, and greens drip from the ceiling during the night.

The face of 40 maidens symbol Orfeo Catala was the first Catalonia to include a female voice.

The rose garden ceiling formed by over 2,000 roses, which is a symbol of the Sant Jordi, the patron Saint of Catalonia. Accompanying with the roses are the columns on each side that open up like palm trees.