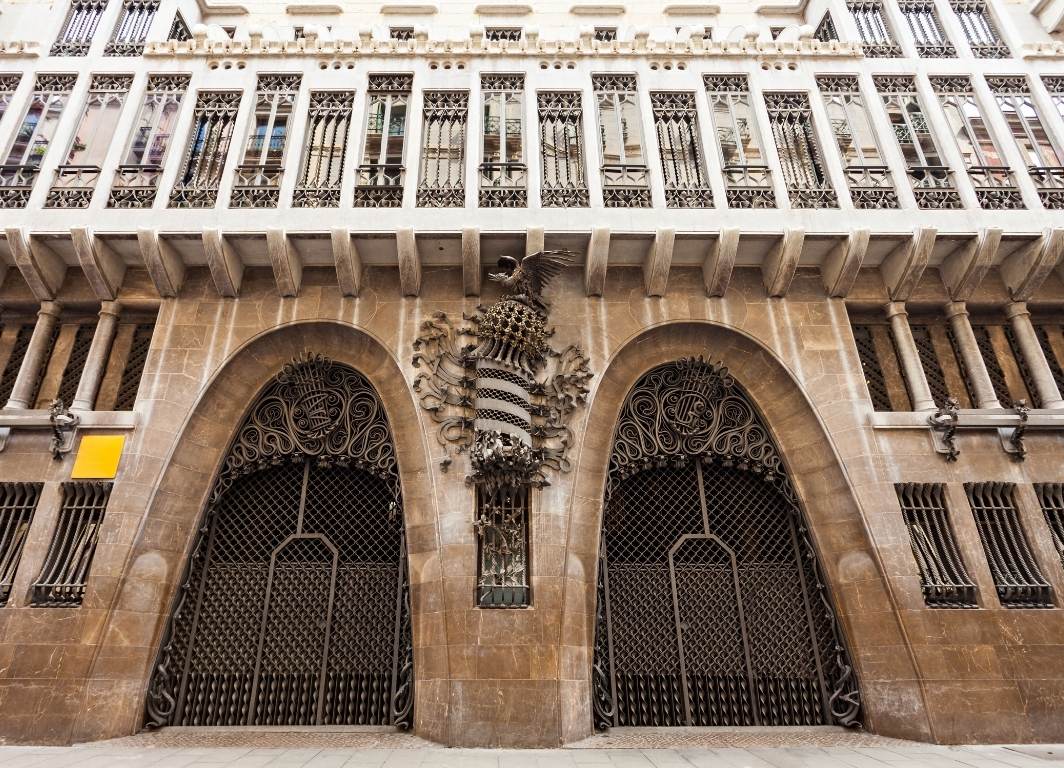 Palau Güell, also is known as the Güell Palace, was built between 1886 and 1890. The project was the first commission work of young Antoni Gaudí from Eusebi Güell, an industrialist and politician. Güell played a vital role in Gaudi’s life as one of his best friends and the most significant client.

The Güell Palace is notable for being one of the world’s first architecture in the Art Nouveau style. This building is a truly remarkable example of Guadí’s architectural genius. The architect incorporated space and light using highly original quality materials, such as wrought iron, pottery, glass, stone, wood, and various other metals.

Palau Güell became a piece of sensation architecture is also due to the flawless handworks. Gaudí collaborated closely with several artisan experts where they have the traditional techniques, and Gaudi utilized to create revolutionary work.

The Central Hall of Palau Güell was a stroke of absolute beauty, a work of art! It is the only example of a domestic architecture that Gaudi completed.

The Palace was the Gùell’s family home until they moved to Park Güell.

In 1984, UNESCO declared the Palace as a World Heritage Site by UNESCO.

Antoni Gaudí i Cornet (1852-1926) was a Catalan architect. He is known as the most significant influencer of Catalan Modernism. Most of Gaudí’s works are in Barcelona, including Casa Vicens, La Sagrada Família, Parc Güell, and Casa Batlló. The architect has seven propertie are the World Heritage Sites by UNESCO.

Gaudí was born in El Baix Camp Tarragona before moving to Barcelona to study architecture. In the early stage of Gaudi’s career, he began introducing some of the essential elements in his work that would become the basis of his later work; During the mature phase of his career, Gaudí began to left historicist styles behind and successfully create his own personal style – which is later known as Gaudinian aesthetics.

Eusebi Güell Bacigalupi (1846-1918) was born in Barcelona. He is a Spanish entrepreneur who profited greatly from the industrial revolution in Catalonia in the late 19th Century.

In 1871 he married Isabel López Bru, and the couple has ten children together.

Besides being a successful entrepreneur, Eusebi Güell is also an active Catalan politician and was a member of Barcelona City Council and deputy of Barcelona Provincial Council. 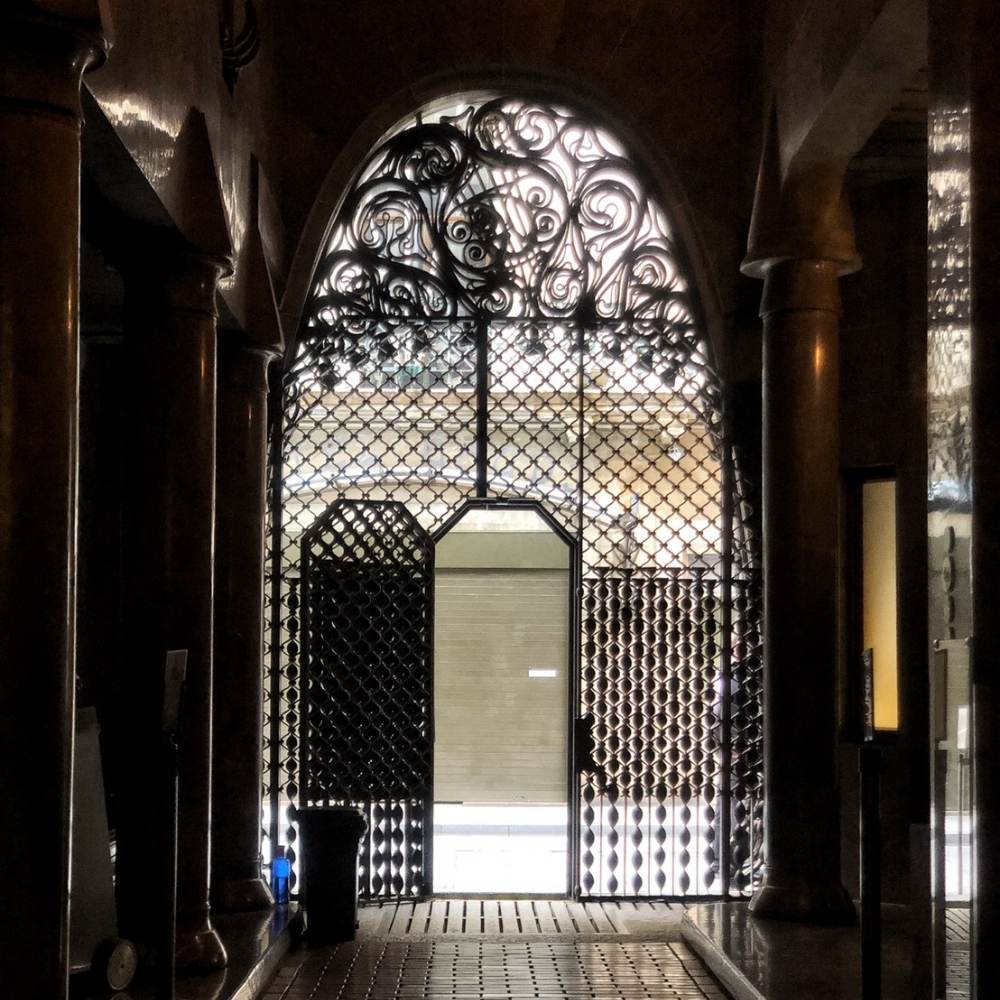 Upon entering the building, there are two large eyecatching parabolic arches designed by Gaudí. Underneath the arches are the metal doors made by Joan Oñós and the Badia Miarau brothers, the masters of wrought ironwork.

The door was designed thicker in the center compared to the upper and lower parts; it allows the light to pass through while still keeping the privacy by making it possible to look out from inside, but not vice versa. 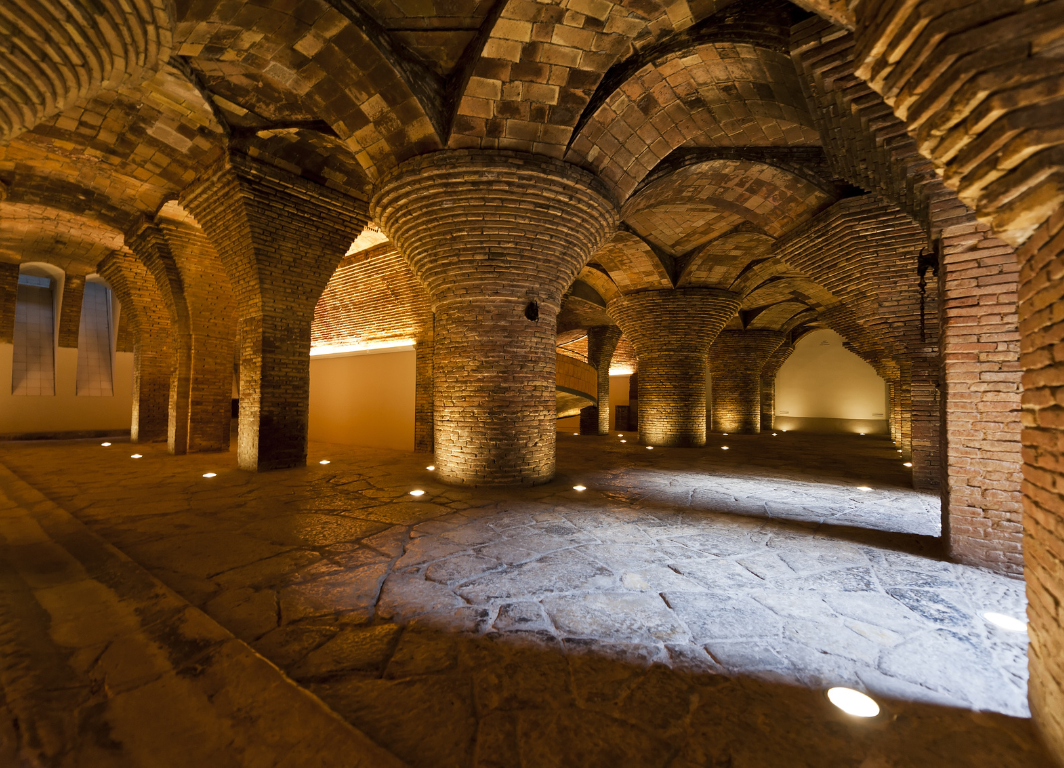 Antoni Gaudí designed the basement in an arch mushroom shape and completely built-in mostly raw bricks, except for the floor. The open space improves the ventilation system and enhances the basement’s light condition. The spiral ramp enabled the servant to navigate the horse to the basement efficiently. 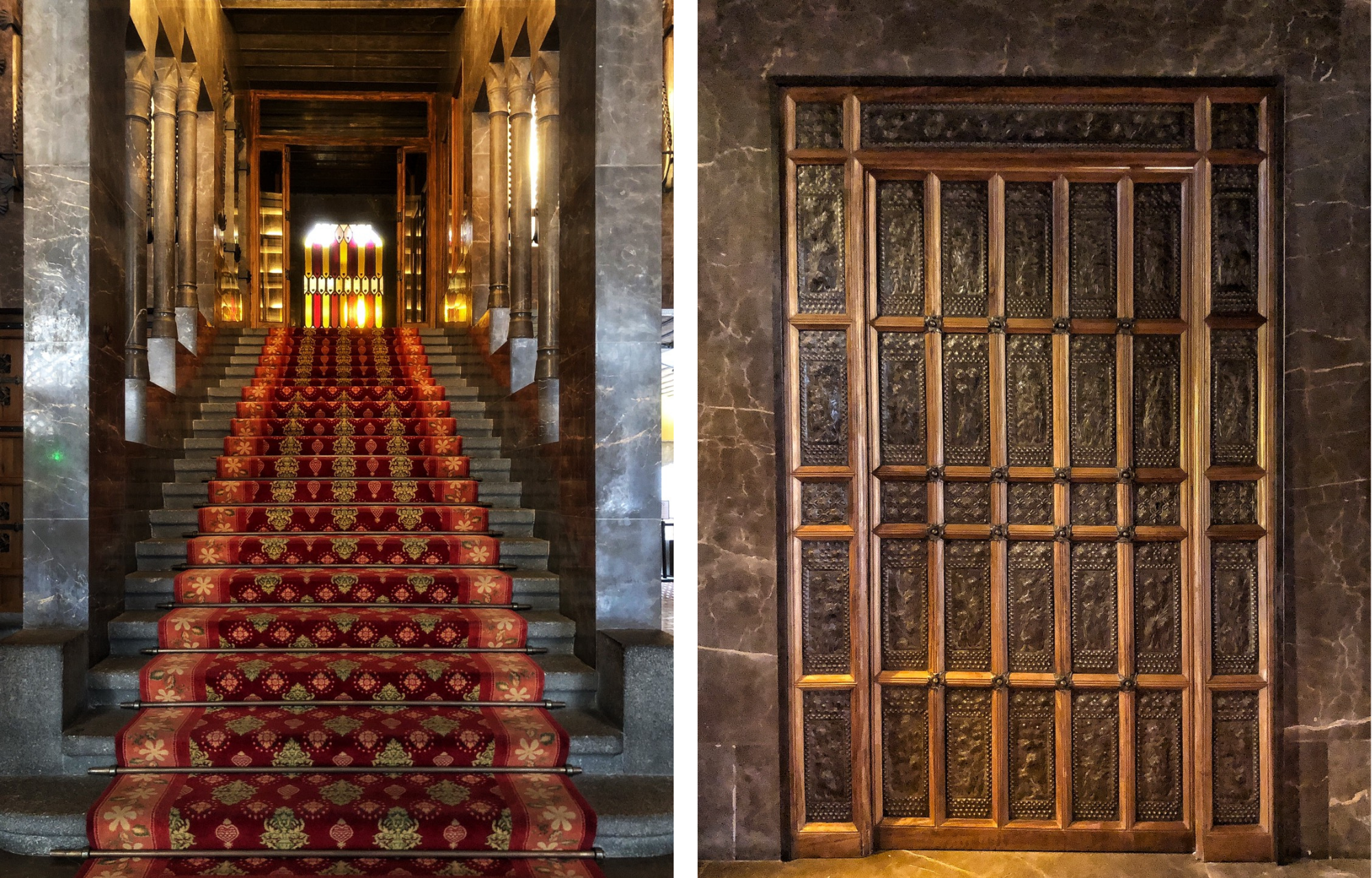 The primary staircase is made of the snake-eye stone material from the Pyrenees, a mountain range between Spain and France. Gaudí designed the stained glass window on the top, which features the four stripes of the Catalan flag.  This stairs will take you to the Mezzanine Vestibule area of the house. The wooden door embossed with iron soffits. The mezzanine vestibule is where Eusebi Güell’s office and private library were located, which are not open to the public at the moment. 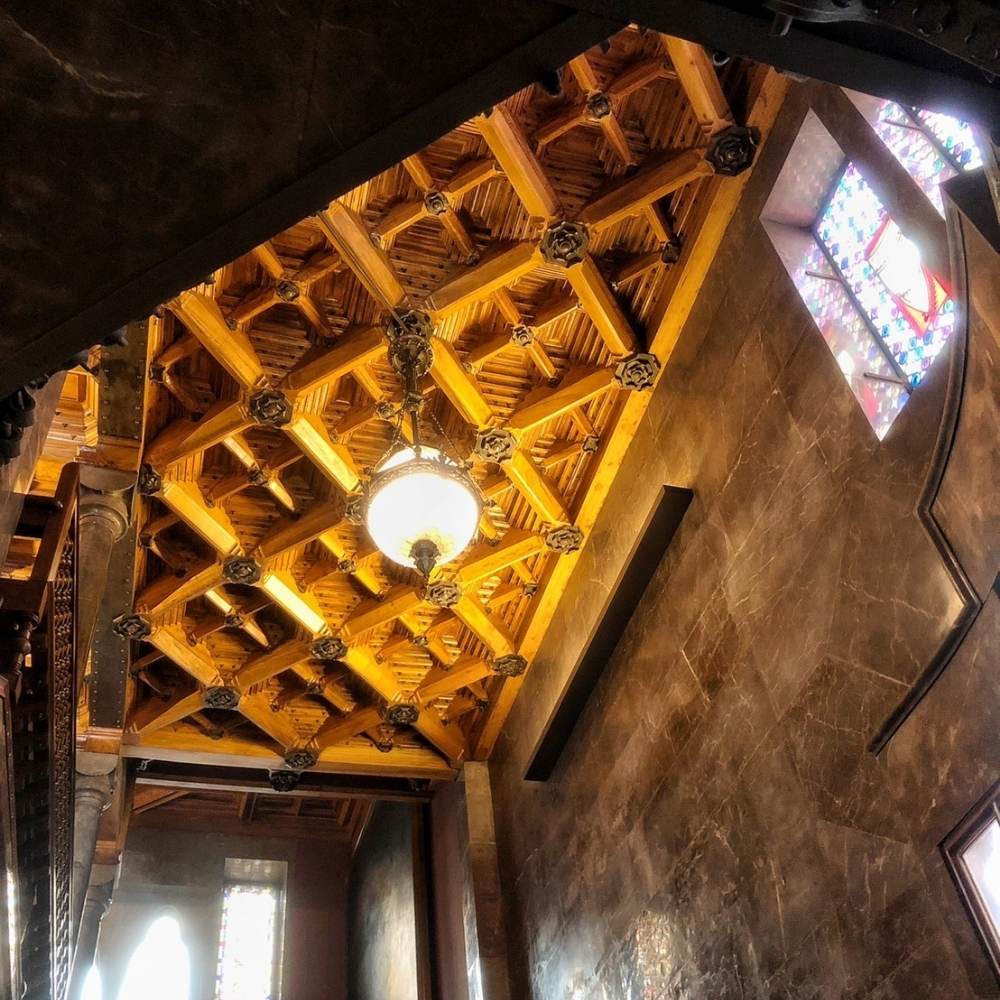 The Coffered Wooden Ceiling above the Staircase

The stair that leads to the main hall of the house, overhead the staircase is the magnificent coffered wooden ceiling made with Red bullet trees wrought iron elements. The lamp hanging up there is an original decorative element from Guadi’s period.

The Hall of Intimates for Family’s External Activities

This great Hall is a private space dedicated to the family’s public social activities, which Gaudí designed under the Arabian influence.

The room is divided into three sessions:

Piano displayed at the first and entrance of this room. This is where the Güell daughters rehearsed and performed piano concerts. Eusebi Güell’s oldest daughter – Isabel Güell López is a musician who played piano and organ, as well as a talented composer.

In the central area is a quiet corner called the smoking room. Gaudi designed the bench and adapted it according to the bay window’s rounded shape. The young architect also invented a shade system for ventilation and sunlight control.

The walnut table and oak chairs in the Dinning room were initially from the Güell era. 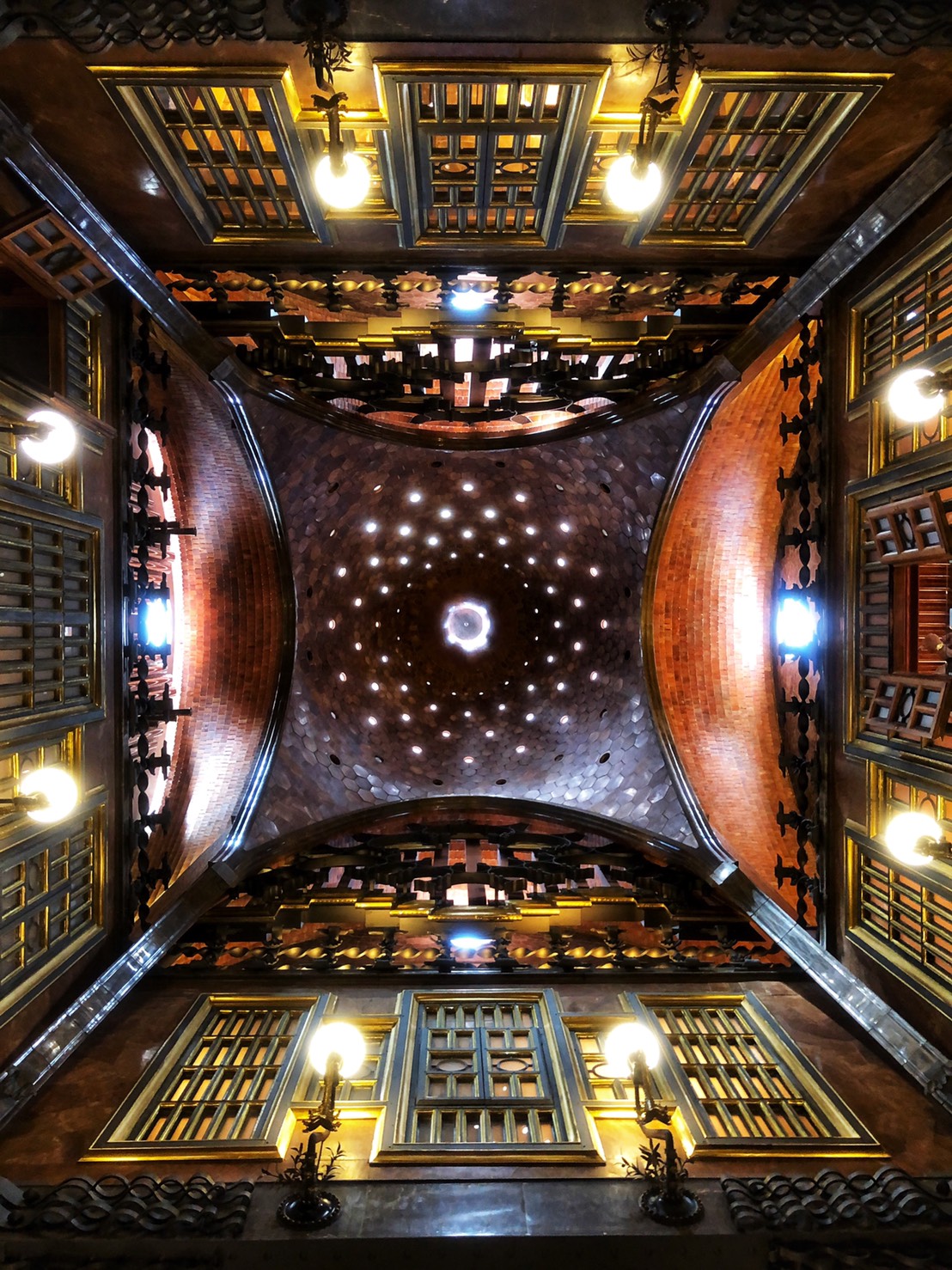 The Hall of Lost Steps

The hall of lost steps guides the visitors to the central hall’s entrance. The lavish decoration in The Central Hall reflects on the social status of the Güell family. Antoni Gaudí designed the room using the height and columns to expand the hallway’s visual space and add on the bay window that allows the natural light to come through the Hall.

The impressive ceiling of this hall is made of oak and wrought iron with gold leaf; behind the door from the picture above is the dressing room for ladies who were attending the event.

The Central Hall is the center area of the entire residence, mainly functioned for family events such as concerts, operas, and religious services.

The most incredible part of this room is finding a unique parabolic dome overhead supported by four arches. Some of the stone pieces are perforated, which allow the natural light to shine through during the day and night. Other than the impressive dome, Antoni Gaudí also decorated the room with multi-color limestone. 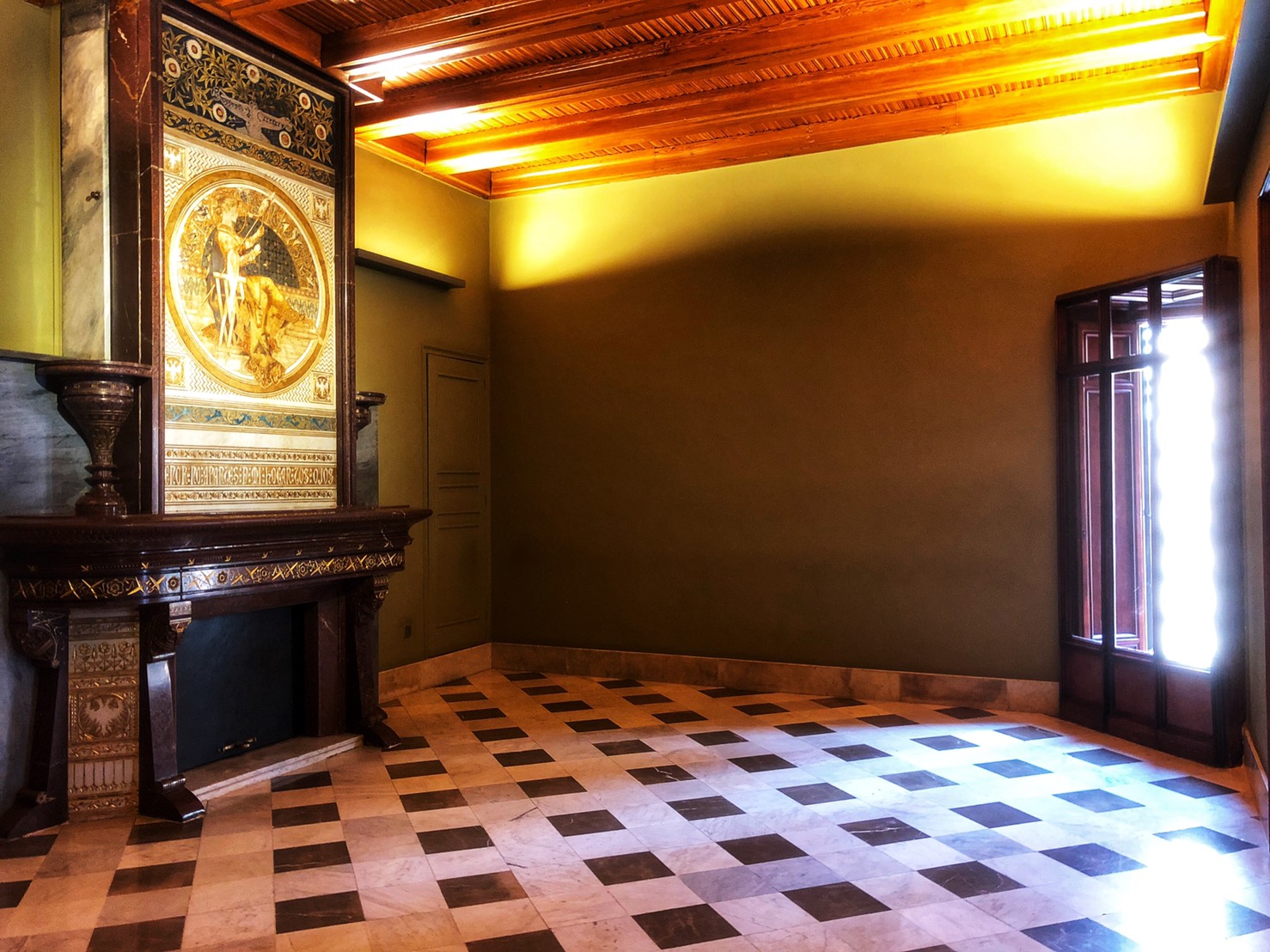 This floor was solely used by the family, which leads to Güell’s family bedroom. The fireplace is made of red marble and alabaster designed by Camil Oliveras.

The building was mostly empty after The Güell family moved to Park Güell. Until 1992, Barcelona Provincial Council started to recovered some of the original furniture after spoken to several families Güell’s family. Currently, part of this floor is also used as a permanent exhibition showcasing the decorative arts. 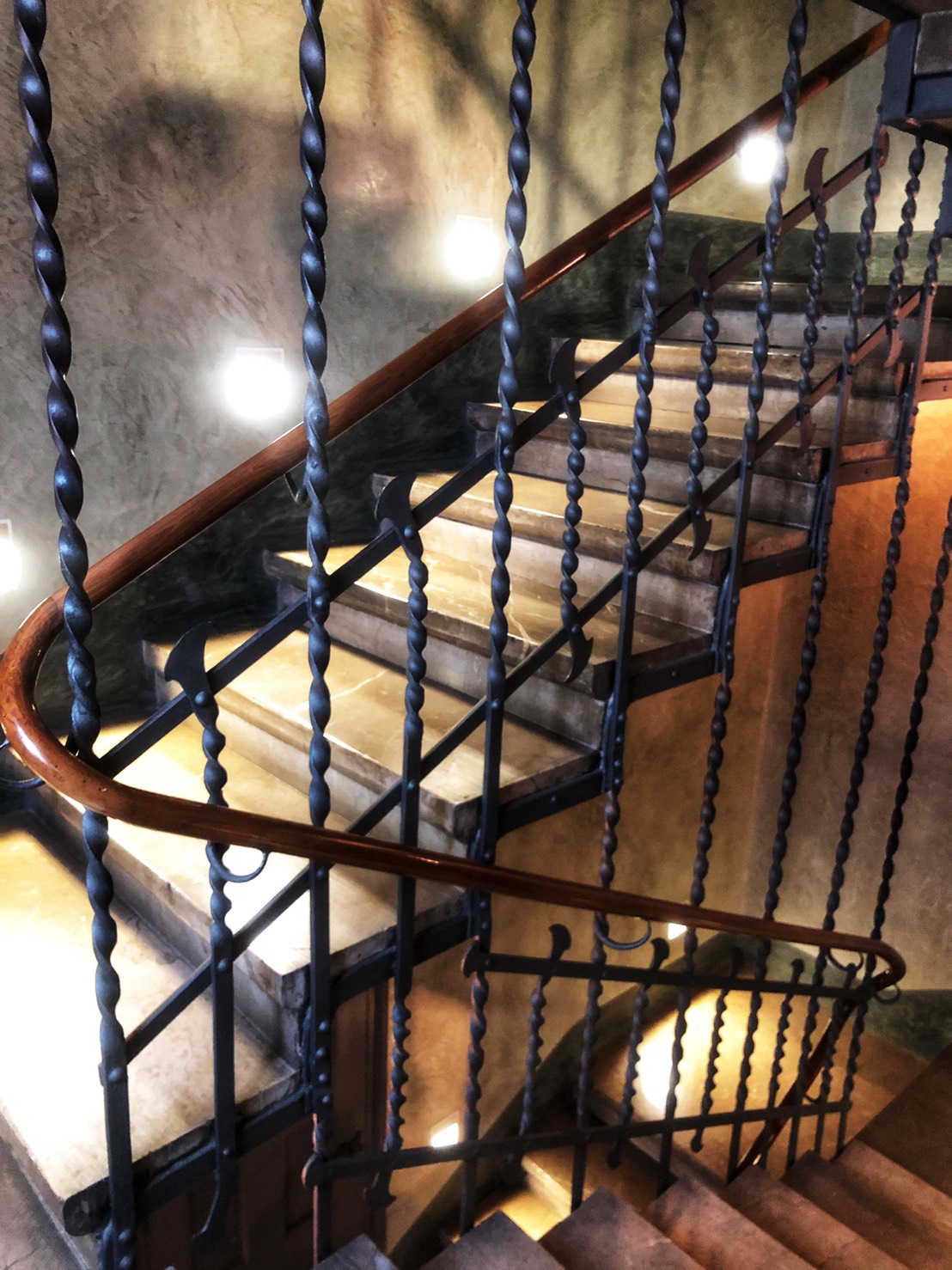 This semi-suspended staircase in Palau Güell is the only staircase that connects the entire building from the top to the ground. 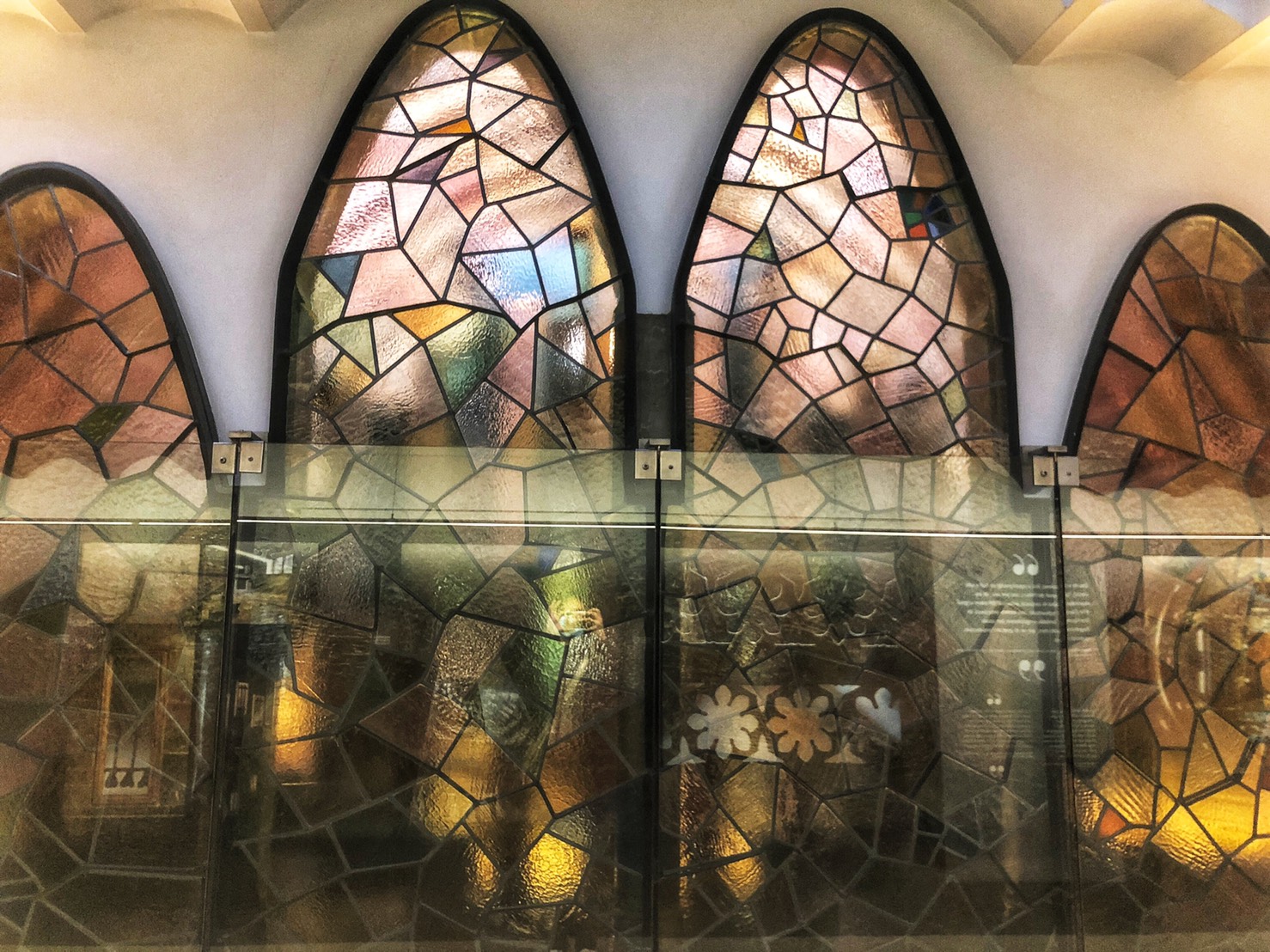 The attic was the workspace for domestic staff where the laundry room, kitchen, and servant’s room located.

The stained glass shown above was designed by Gaudí, using a technique called trencadíssystem, which is a type of architectural decoration of Catalan modernism. The architect repeated this technique around his works, it is generally made with irregular ceramic shards to create an abstract design. 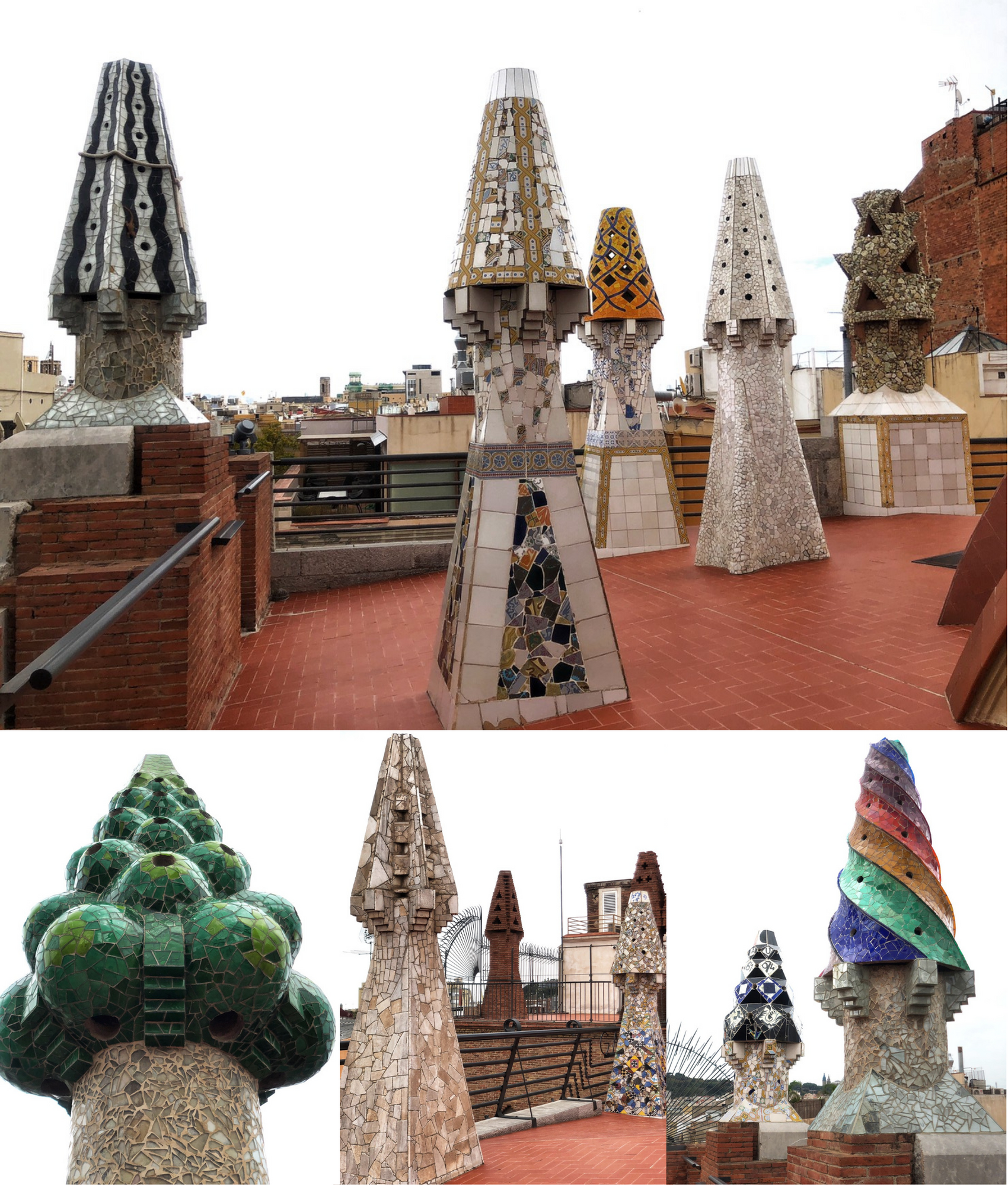 The floor of the roof terrace is fascinating; it was designed in an irregular shape. It felt like walking on a wavy ground. Gaudí designed these chimneys into polychrome sculptures with bases, shafts, and caps.

15 Chimneys connect with the fireplaces to the palace. 6 chimneys are made of bricks, while the other 14 are decorated with trencadís technique, using shards of ceramic, glass, marble, vitrified sandstone, and earthenware.

In the center of the roof terrace is the 15-meter spire of the dome that crowns and illuminates the central hall. Gaudí used recycling materials from the abandoned limestone to complete this part of the structure.