The Most “Powerful” Temple in Taiwan 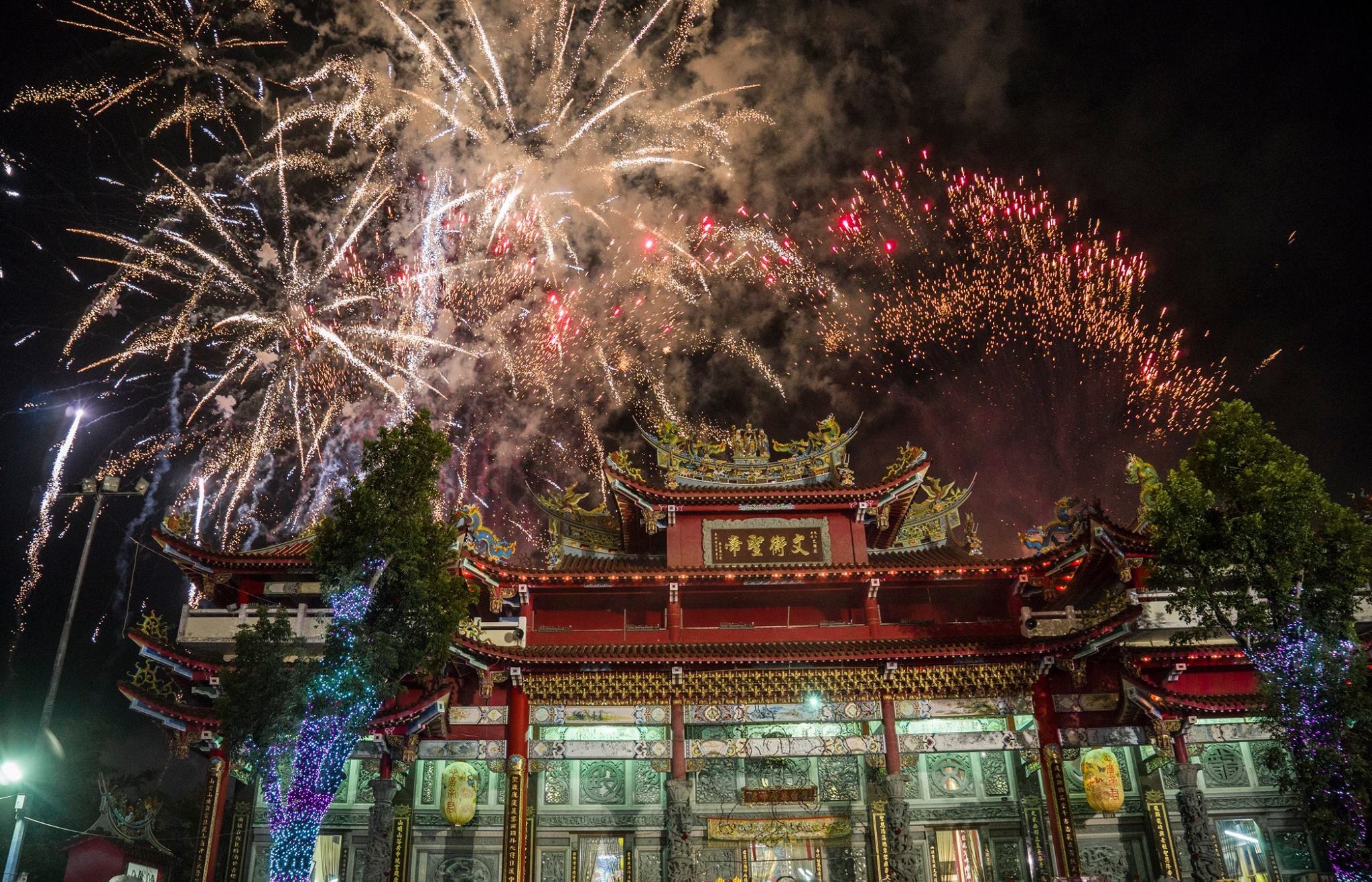 Visiting Temples in Taiwan is a sacred mental, physical, and spiritual experience. Temple culture lies at the heart of Taiwan’s religious life. It not only reflects on the life of ordinary people but also acts as the social center. Taiwan has more than 4,000 temples across the nation, practicing different beliefs such as Confucianist, Buddhist, Taoist, and more. Temples in Taiwan are known for their diversity, colorful architecture, and immersing artistic values. They are the essential substance of its traditional culture.

Temple in Taiwan can easily be found on the mountains, coastal plains, or outlying islands. But there is a hidden gem in the suburban Longqi district of Taiwan, Tainan city, best known for the most “powerful” and multicultural temple in Taiwan  – Longqi Wengheng Temple.

The exterior design and size of the architecture look traditional and mesmerizing. However, the internal elements of the temple are where East merges with West. The integration is strange but not out of place. Somehow, the contrast between the superheroes gives an interesting feeling of allowing the visitors to unlock their traditional minds to reshape the experience.

This is the first time been done for the temple in Taiwan and internationally, making it a unique destination to visit for anyone.

The Longqi Wenheng Temple was initially constructed as an austere temple in 1998. After nearly two decades of transformation, it has become a magnificent cultural hub. When you enter the driveway of Wenheng Temple, the front and center architecture is bearing and imposing. The outdoor area was decorated elegantly with simplicity. The overall energy carried along within the whole place is powerful yet peaceful.

Mr. Chen Qingfei, the founder of Longqi Wenheng Temple, was a regular prayer. Growing up, he had to rely on medication due to the rare foot disease that caused him pain and immobility.  Life was under tremendous financial stress at an early age. Other than the time with family and at work, meditating in the temple was his way of maintaining a positive attitude and keeping faith in life. One unforgettable night, when he worshipped, as usual, he suddenly felt powerful spiritual energy communicating through a blurry light. He described the experience as an affirmation from God and a sense of peacefulness going through the body.

Since then, his strange illness was slowly cured, and his hard work in the construction industry has paid off. Today, he is one of the most successful businessmen in Taiwan. 20 years after his business took off, Mr. Chen Qingfei started planning to build a new Wenheng Temple to show his gratitude by giving back to society. He has developed the Longqi district into a cultural hub along with his team and the local government.

Over the years, he continues to plant trees, build rest areas, and invite less-known artists to celebrate their works. The outdoor space with thoughtful facilities is usually full of cyclists and families to enjoy for free. 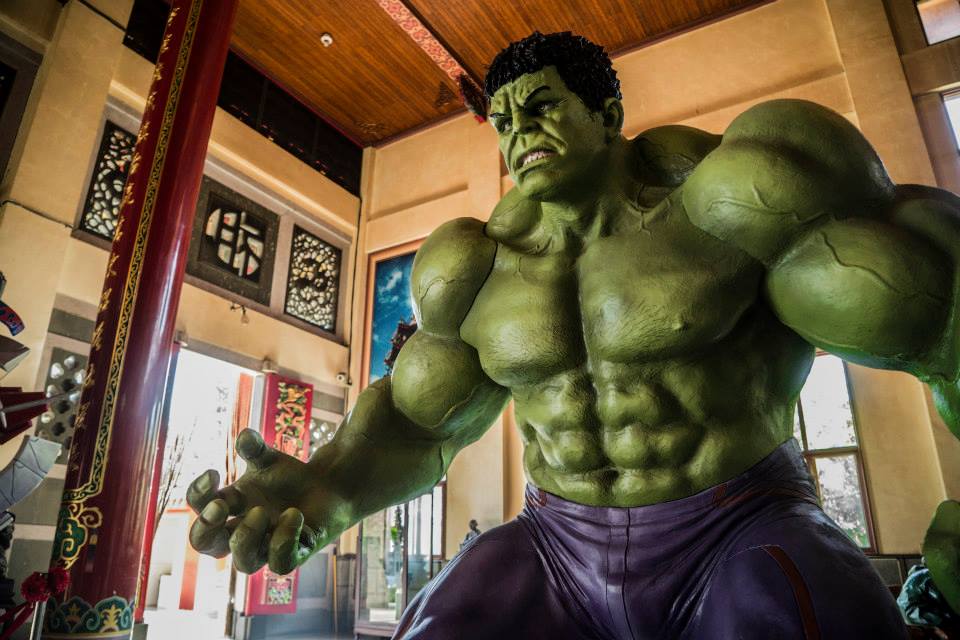 The Most “Powerful” Temple in Taiwan

Ironman, Transformers, The Avengers, The Hulk, Thor, and more

When you enter the front hall of the temple, in addition to the traditional hero Guan Gong and Gods, you will also see multiple American movie superheroes in actual size. The statues of these superheroes were donated by the members of Wenheng temple, including Mr. Chen Qingfei. Due to the remote location of the Longqi district in Tainan, Mr. Chen Qingfei thought that the superhero could be an excellent link for the temple to attract the younger generation to understand the traditional customs and culture.

Mr. Chen Qinfei once saw his great-grandchildren playing with an ironman toy, and on the same day, the same superhero was showing on the television. He became curious and eventually brought the first set of real-size (each about 180cm high) Iron Man figures to the temple. The three superheroes from the iron man under the American Marvel movie were the first to arrive in the temple. Since then, “Wenheng Temple” has become an innovative and unique religious resort that is rare in Taiwan and worldwide.

The Transformers, Hulk, Hulk Destroyer, Captain America, and Thor also joined the superhero squad standing on each side of the temple gate; The Hulk statue is 3 meters tall, and the Hulk Destroyer weighs 600 kilograms. 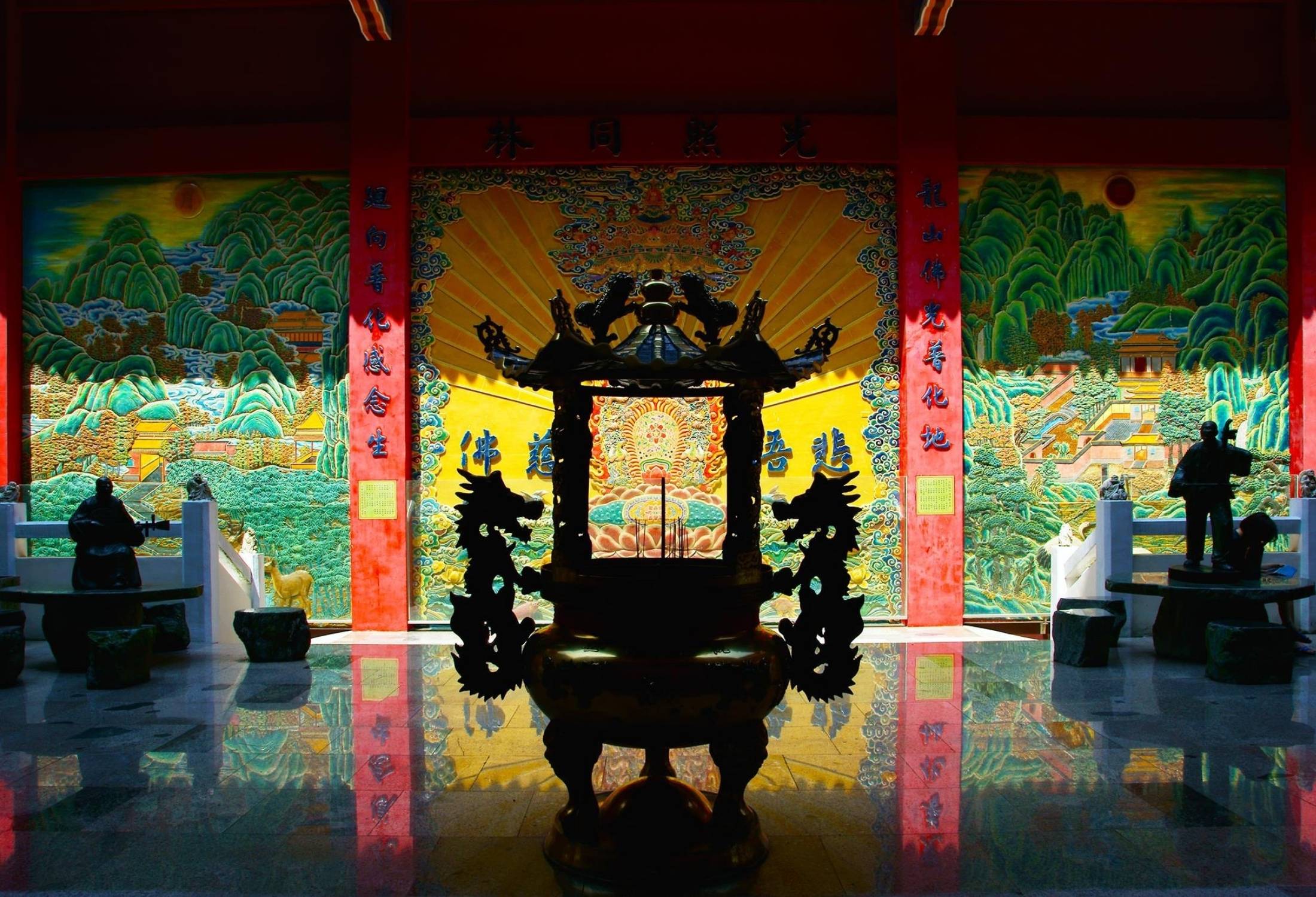 Along with the traditional art, Yi De Pavilion combined traditional Taiwanese art to enhance cultural belief by integrating traditional eastern art with a modern western touch into the museum. It is a space where you can follow the footsteps of the masters, allow you to experience the exquisite art and craftsmanship of these Taiwan’s national treasures! 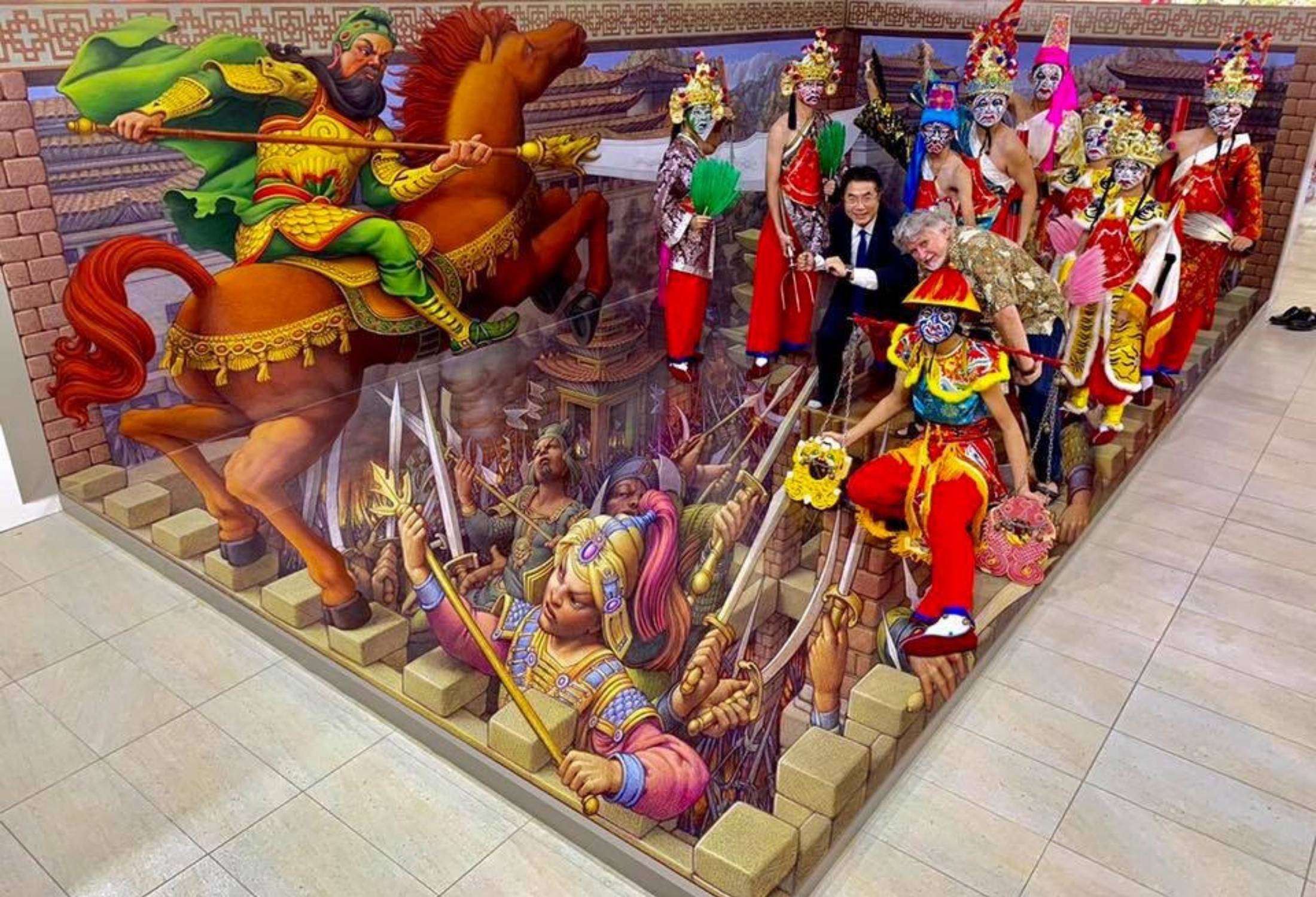 Longqi Wenheng temple worships Guan Gong, and the temple has invited the Master 3D Artist Kurt Wenner to create Guan Gong’s Three Kingdom story using oil paints with a new production process. Kurt Wenner is one of the world’s leading artists, most famous for inventing interactive 3D art illusions. His work has appeared in over 30 countries, including St Peter’s Basilica in the Vatican. His works have attracted thousands of visitors around the world. 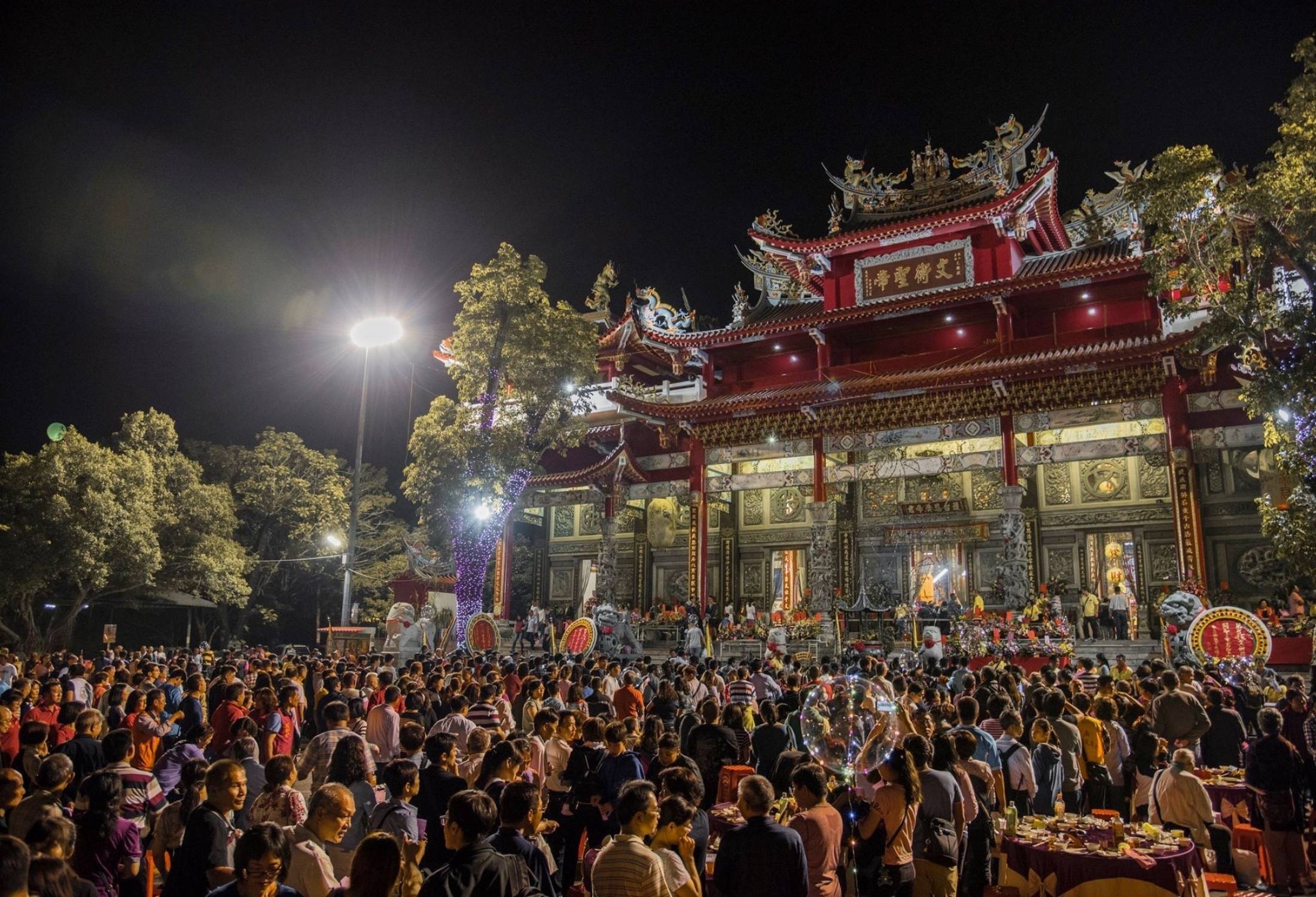 Most temples in Taiwan are small due to the limited space and investments. In addition to the majestic main building sitting at the front and center of the whole square, the outdoor space of Wenheng Temple is also relatively huge compared to the other temples in Taiwan. It was thoughtfully planned with trees, benches, picnic areas, and even a self-service coin-operated karaoke.

At the side of the square, a nearby convenience store where you can find a statue of Elsa and Snow Treasure offers snacks, drinks, souvenirs, and more. On the weekend, there are several kiosks lining up offering food and beverages as well.

Every Chinese New Year, Longi Wenheng Temple hands out thousands of red envelop enclosed with lucky money for each prayer – a bill worth NT$100. Many visitors arrive as a family early in the morning to ensure a spot every year.

Longqi Wenheng Temple hosts an annual marathon and marathon relay. The event attracts thousands of participants, including some from as far away as Hong Kong. The roads on mountains and hills are constructed in a curved way, making the marathon one of the most challenging and beautiful runs in Taiwan.

The purpose of the festival is to celebrate the birthday of Wenheng temple. Temple members from other cities start to arrive in the afternoon, joining to celebrate this special day. The temple hosts 800 tables for an outdoor feast that must be reserved in advance.

Wenheng Temple can easily be a place where you can spend a few hours with friends and family. The temple’s innovative thinking and exceptional performance have stood up from all other temples in Taiwan, which attracted all generations of visitors significantly. If you are traveling to Tainan, Longqi Wenheng Temple in Taiwan not only showcases its character, but the temple also promotes sustainability as a non-smoking temple and waste recycling. A unique cultural destination for everyone.